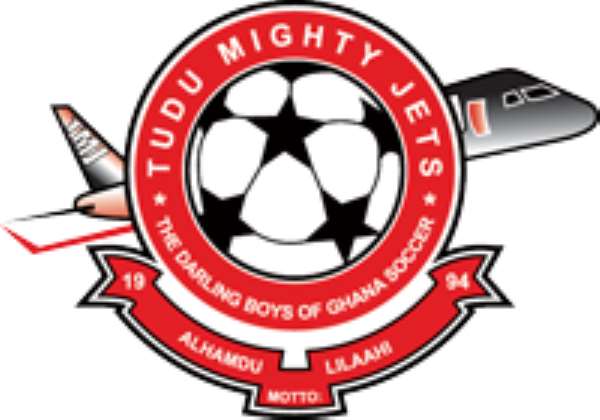 Accra , Apr 07, GNA - Struggling Tudu Mighty Jets failed in their attempt to temporary turn around their ailing season as they struggled for the three maximum points when they hosted Aduana Stars to a one all draw game in their 23 Week Glo Premier League meet at the Accra Sports Stadium on Saturday.

Both teams played incredibly poor on a day that Jets needed a win to boast their pitiable run in the League but their effort proved otherwise as Aduana dominated the first half and were unlucky not to have scored.

The first half was blighted with comedy of errors with Aduana's strongest effort yet in 20minutes when the former champions' Emmanuel Akuoku raced deep into the half in a test that Jets goalkeeper Kotei Blankson did well to pass the mark.

Mighty Jets looked the weaker side the entire first half with their brightest opportunity falling to Eli Ben Agbeko just before half time when he darted from the right only to sweep way off target with injured goalkeeper Steven Adams compromised.

From the recess, Jets appeared recovered from their first half 'ills' as they pushed for a goal from every angle. But whiles the visitor's rear did some fine defending, it was Jets substitute Nayaro Alhassan who missed from an unpardonable spot when he was sent clear from the middle on the hour mark.

With pressure mounting on the visitor's, goalkeeper Adams had to save them from conceding nine minutes on when he saved brilliantly from Agbeko's goal attempt from the near post.

Both teams failed to capitalise on the few chances that were created in a not impressive outing that left the few fans at the stadium wondering about the performance of the players, especially from the strikers until the final whistle.