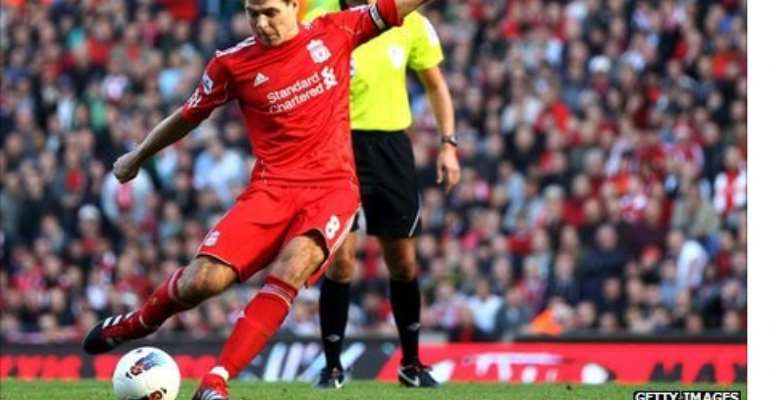 Cisse headed in Hatem Ben Arfa's cross in the first half before tapping in from Demba Ba's centre after the break.

A poor afternoon for the visitors, who had Andy Carroll booked for diving against his former club, was made worse when goalkeeper Pepe Reina saw red.

They have now lost six of their last seven Premier League games.

Reina's dismissal came in the 82nd minute when, in collecting a Mike Williamson header, he was fouled by James Perch.

But when the Spaniard squared up to the Newcastle defender, leading with his head, referee Martin Atkinson had little choice but to send him off.

Reina, who had played 183 consecutive league matches for the Reds, will now miss the next three games, including the FA Cup semi-final against Everton on 14 April.

Kenny Dalglish's side remain eighth in the Premier League, while Newcastle move level on points with fifth-placed Chelsea as they search for tangible reward from a season of remarkable evolution.

That Cisse was on target again to take his tally to seven in eight appearances was unsurprising, such has been his impact since joining from Freiburg for £9m in January.

It further illustrated the current gulf between the Senegalese and the man who used to wear the Newcastle number nine shirt.

Carroll - like Jose Enrique, making his first return to Tyneside since signing for Liverpool last year - was booed by the Newcastle supporters from the kick-off and ironically cheered when substituted later on.

And he did not improve his relations with the home faithful when he was booked for rounding goalkeeper Tim Krul and falling to the ground with the goal at his mercy.

The £35m striker, who has scored eight goals since his January 2011 move, was then left further frustrated when he headed off target later in the first period.

Craig Bellamy's deflected cross also clipped the bar and Liverpool had a valid penalty appeal when Danny Simpson, on the goal-line, blocked Williamson's inadvertent header with his arm.

But those attempts were overshadowed when Cisse cleverly headed back across goal and inside the far post to finish off great trickery by Ben Arfa.

In keeping with a superb season, built on some new-found talents which have graced the Premier League, the goal gave Newcastle added confidence on the ball.

Cisse headed just wide from Danny Guthrie's centre before half-time with Willamson hitting a post after the break.

But once again Liverpool, who have won just two Premier League games in 2012, understandably looked short on belief in front of goal.

The Reds went further behind when Ben Arfa linked with Ba and, despite the Frenchman failing to make contact with the return ball, Cisse tucked in at the back post.

And Reina's dismissal summed up a disappointing afternoon, with Enrique replacing the keeper in goal as Liverpool had made all their substitutions.

That led to the Newcastle fans mocking the Liverpool full-back, as his previous claims of Newcastle lacking top-six ambitions were made to look ill-judged.

Chiefs and Queen mothers of Nadowli-Kaleo congratulate Alban...
17 minutes ago

I intend to live my my oath – Bagbin
17 minutes ago