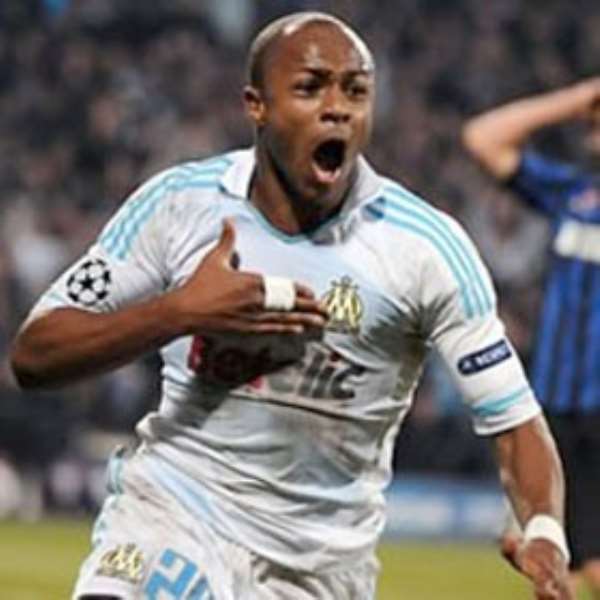 Marseille midfielder Andre Ayew is hoping to be fit ahead of Wednesday's Champions League clash against Bayern Munich.

The Ghana international who is already suffering from a long-standing shoulder injury left training yesterday with a neck brace around his neck.

This comes after he was knocked over by a Nice player in their league clash over the weekend which caused a sprained neck.

The injury is a huge worry for Marseille as Ayew is by far the key player for the club ahead of their meeting with the Germans.

But the youngster is a fighter at heart and he is expected to defy the injuries to face the physical challenge of the German side.

'Ayew locked his neck in a collision and it was still painful yesterday,' Marseille coach Didier Deschamps said.

'He's in the hands of the medical staff so that the pain disappears.'

Ayew is the clear star in Deschamps' squad, providing creativity, speed and goals from midfield.

The 22-year-old has been crucial in the Champions League, having scored four goals for Marseille, including the late winner in Marseille's 1-0 victory over Inter on February 22.

Ayew, son of their former CL winner Abedi Pele, has scored four goals in this season's tournament, more than any other Marseille player since Didier Drogba, now with Chelsea, who scored five in the 2003-04 season.

Marseille have not gone as far in the competition since they won the inaugural Champions League in 1993.

Marseille face a tough test to continue their European adventure, with Bayern especially keen to make the final because it will be played at their home stadium in Munich in May.