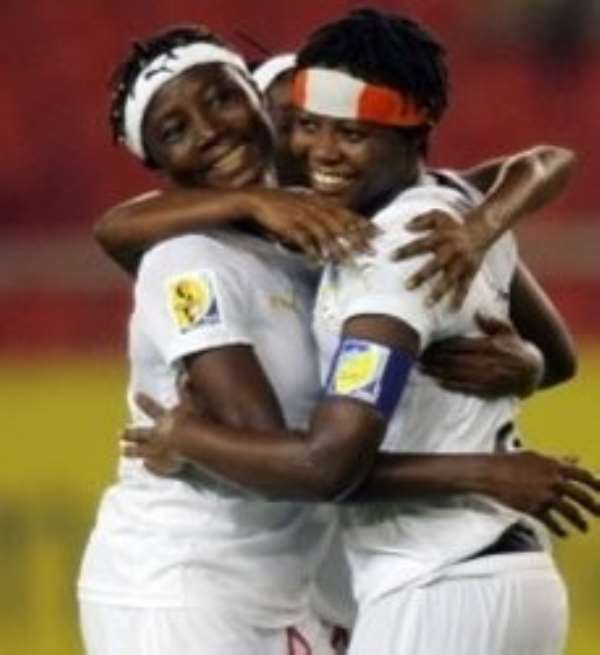 Accra, March 23, GNA – Ghana's Black Queens booked their place at the 2012 FIFA U-17 Women's World Cup at Azerbaijan after walloping their South Africa counterparts 5-1 in the second leg qualifier at the Accra Sports Stadium on Friday.

A hat-trick from Alberta Ahialey and a brace from Captain Priscilla Okyere ensured the twinkle twinkle Ghanaian Ladies advanced 5-1 on aggregate after managing a barren draw in the first leg held a fortnight ago in South Africa.

The feat that ensures that the Black Maidens have qualified for every edition of the biennial championship since its inception in 2008.

The Bantwana were no match for their hosts, who dominated the final leg encounter from the onset. Interestingly it was the South Africans who took the lead as early as the fourth minute through Mosili Makhoali, who connected from close range.

The lead lasted for barely 60 seconds before Ahialey restored parity by tapping in from a cross from Sumaila Sherifatu.

From then on the Maidens took absolute control of the game as they pinned the South Africans to their own half with winger Sherifatu leading the raids upfront. Despite the constant supply of balls, Ahialey and Beatrice Sesu fluffed at many of the initial opportunities that came their way.

The South Africans deplored a defensive strategy by leaving only two players upfront, apparently content with the scoreline, which was in their favour.

Two minutes from the end of the first half, Ahialey shot the Maidens into the lead by connecting home a cross from Sherifatu, who outwitted her marker on the counter.

On the stroke of half time, Ahialey sealed her hat-trick after completing a move with support from Linda Addai and Sesu.

The South Africans appeared exhaustive in the second half as the Ghanaian girls played all the ball in their half.

Both teams made some changes to their squad but it was the hosts who benefited the most from the introduction of fresh limbs.

Eight minutes into the half, Okyere scored the fourth goal with a grounder that beat South African goalie Katlego Moletsane.

In added-on time, the skipper completed the rout with a long range effort that caught the South African goalie off guard to send the home fans into wild jubilation.

The other African qualifiers will be determined between the winner of Nigeria-Zambia and Tunisia-Gambia.

The final tournament will be held in Azerbaijan from 22 September to 13 October, 2012.