Torres... at last for Chelsea 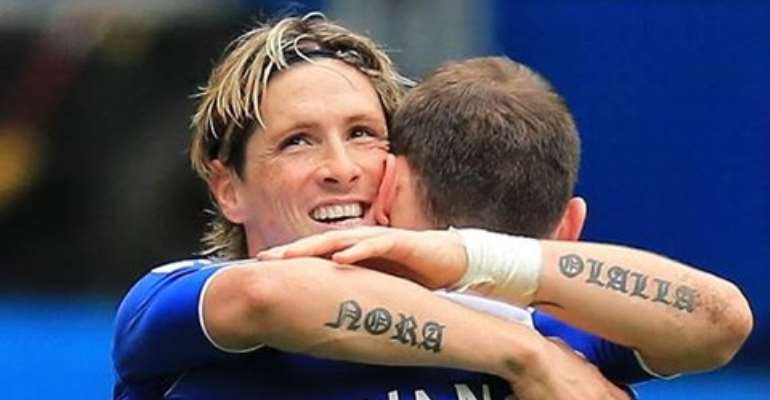 Fernando Torres in a hearty hug with Ivanovic

Fernando Torres finally re-found his scoring touch as Chelsea comfortably beat Leicester City 5-2 at Stamford Bridge to progress to the semi-finals of the FA Cup.

Gary Cahill and Salomon Kalou gave the Blues a half-time lead before the troubled Spaniard netted either side of Jermaine Beckford's clinical finish.

Late on, a wonder goal from Ben Marshall and a Raul Meireles tap-in gave the game an impressive scoreline.

Roberto Di Matteo made seven changes to his Chelsea side after Wednesday's extra-time victory over Napoli. Petr Cech, Branislav Ivanovic, Daniel Sturridge and Juan Mata were retained with Torres starting up front.

Leicester made just one change to their line-up from the Championship game against Birmingham in mid-week, Paul Konchesky returning at left back after a suspension.

The Foxes made a positive start, Beckford finding space on the edge of the box and curling an effort just wide of the far post.

Chelsea took the lead, however, as Cahill rose highest to meet a Mata corner and power a header home.

The 26-year-old then revealed a t-shirt as he celebrated with a message dedicated to former Bolton team-mate Fabrice Muamba, as the midfielder continues to recover in hospital after collapsing at White Hart Lane on Saturday.

The home side continued to press forward, Sturridge twisting and turning his way towards goal before feeding Mata, who saw a bundled effort hacked off the line by Konchesky.

And the pressure told as the Blues launched up the field on the counter attack, Torres taking the ball down the right flank before squaring to Kalou who took a touch before calmly slotting past Kasper Schmeichel.

Sturridge was looking lively, magnificently trapping a high ball before dinking an effort just wide, with Torres disappointed that he wasn't given a chance to end his monumental goal drought.

The Spaniard seemed in determined mood, planting a header at Schmeichel before the Dane had to react superbly to tip his fierce 20-yard effort away.

But the Championship side kept their heads up, and Neil Danns forced Cech to make a good save with a driven shot before Paul Gallagher's long-range effort was deflected away by Cahill.

The former Blackburn winger was then substituted after failing to shake off a knee injury and replaced by Lee Peltier as the half meandered to a close, the home fans giving their team a rapturous reception on the half-time whistle.

The Blues made a change of their own at the start of the second period, Mata given a rest ahead of Wednesday's clash with Manchester City, Florent Malouda his replacement.

The Frenchman stretched Schmeichel with an effort from distance before Sturridge again showed a frustrating lack of teamwork, opting to shoot from an angle with others better placed, in an otherwise quiet opening to the half.

Leicester's travelling fans had been in superb voice throughout the match and were almost rewarded for their support as Lloyd Dyer struck wide after a surging run.

The Premier League side's quality came through, however, Kalou set off down the right before cutting the ball to Torres, who found the net for the first time in nearly 26 hours of football as the home crowd erupted in celebration.

The Spaniard almost took a London buses approach to scoring as he rifled an effort over just moments later before Sturridge stretched to meet a cross from Ryan Bertrand but saw his header drift wide.

The Foxes had continued to push forward and finally got a goal, Neil Danns hit the post from 25 yards and the ball rebounded to Beckford who was on hand to tuck in from close range.

As the away support sensed an unlikely comeback, the Blues regained their three-goal cushion thanks to Torres who did manage a second, bursting ahead of Sol Bamba to nod in a Meireles corner.

Marshall had been brought on as a late sub and scored the game's best goal, picking up the ball in midfield and unleashing a thunderbolt from 35 yards.

But it was the hosts who had the final say as Torres turned provider to Meireles, squaring when well placed to shoot for the Portuguese midfielder to slam home.

The win sees Chelsea through to the semi-finals, where they will be making their 10th trip to the new Wembley since its 2007 reopening.