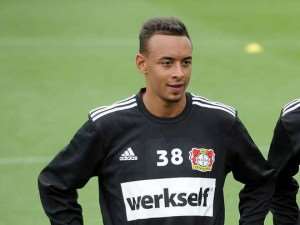 The Ghana Football Association is set to approach Germany Under-21 striker Karim Bellarabi to switch allegiance to play for the Black Stars after his exploits in the Uefa Champions League.

The 21-year-old, who plays for Bayer Leverkusen, made the world take notice of his talents when he scored a classic goal against Barcelona in the Champions League last week.

The attacker was born in Berlin to a German mother and a Ghanaian father.

The Ghana Football Association will continue to explore options of convincing the player to play for the Black Stars.

'We have made contact with the father of Bellarabi over the possibility of the youngster playing for Ghana,' President Kwesi Nyantakyi is quoted by the official Ghana FA Newspaper.

'We must remember that he must be interested in playing for the Black Stars which will make things easier for us in pursuing an international switch for him.'

Karim is a big fan of the Black Stars and reportedly gave an open support to Ghana during the 2010 World Cup.

His father Fuseini says there is possibility of the youngster to play for the four-time African champions.

'When we were in Ghana in December, he was very excited. The only thing is that since he grew up in Germany, his interest in Ghana must be nurtured,' Alhassan Bellarabi told the Ghana Football newspaper.

He grabbed the consolation goal for Leverkusen in their 7-1 disgraceful loss to Barcelona at the Camp Nou last Wednesday.

The talented attacker has scored twice in all competitions this season for Leverkusen.

Ghana FA has been successful in persuading another German-born youngster Jeffrey Schlupp to play for the national team.

Before the 2010 FIFA World Cup finals, Kevin-Prince Boateng agreed to nationality switch and was cleared by the world's football governing body.