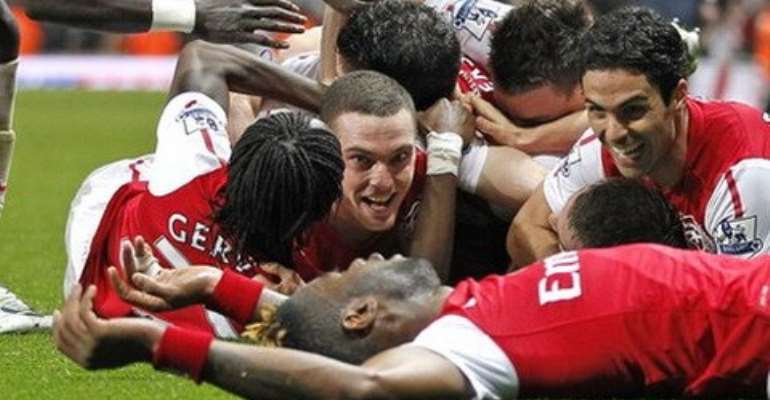 It's all over as Arsenal players bathe in the joy of the 'killer' goal that won the day.

Thomas Vermaelen hit a 95th-minute winner as Arsenal closed to within a point of third-placed Tottenham.

Hatem Ben Arfa gave the visitors the lead with a stylish low finish - but the lead lasted less than a minute.

Theo Walcott fired a cross into Robin van Persie, who scored his 33rd goal of the season with a clinical finish.

Arsenal came from behind to earn victory for the fourth straight game but tempers flared at the final whistle after Vermaelen's dramatic winner.

Use accessible player and disable flyout menus
Van Persie and Newcastle goalkeeper Tim Krul were involved in a confrontation after the goal. The Arsenal striker accused his Dutch compatriot of time wasting in the second half and both players were booked as play spilled into a 98th minute.

It was a riproaring finish to a compelling game as Arsenal continued their remarkable resurgence to keep the heat on their local rivals Spurs, who enjoyed a 12-point cushion over the Gunners just six games ago.

Newcastle's last trip to north London a month ago ended in a miserable 5-0 defeat at White Hart Lane but this time the Magpies benefited from a fifth man in midfield - and that was Ben Arfa.

The Frenchman is yet to find the consistency expected of him following his injury problems but he demonstrated in one swift moment why he is so highly rated.

Collecting the ball on the right against the exposed Kieran Gibbs, Ben Arfa cut onto his favoured left foot to drill an angled shot inside the near post - leaving Wojciech Szczesny beaten.

The brittle Arsenal of earlier in the season may have crumbled after such an early blow, but they demonstrated their new-found resilience with an equaliser within 60 seconds - and there was no surprises who found the net.

Van Persie's form has been sensational in the past year and the Dutchman took his tally to 44 goals in his last 45 Premier League matches after more good work by the impressive Walcott.

Collecting the England winger's cross from the right, the Dutchman's deft drop of his shoulder left Mike Williamson reeling before drilling a low shot beyond Tim Krul.

After restoring parity, Arsenal controlled much of the possession, but an attritional midfield battle ensued - with Cheick Tiote and Alex Song nibbling away at each other throughout.

Arsenal moved up a gear in the second half, with Tomas Rosicky testing Krul with a glancing header. Alex Oxlade-Chamberlain came inches away with a dipping volley from the edge of the box moments later.

Use accessible player and disable flyout menus
Rosicky has enjoyed a renaissance in recent weeks and the Czech midfielder had another impressive game in central midfield but was guilty of a glaring miss halfway through the second half - miscuing his shot from Walcott's cutback.

Arsenal became increasingly desperate for a winner and the introduction of Gervinho added some welcome urgency to the Gunners' attacks. But the Ivorian fluffed his chance of stealing the headlines, scuffing his shot at the far post after Mikel Arteta's free-kick evaded everybody.

The Emirates finally found its voice as Arsenal poured forward in growing numbers to greet a grandstand finish.

Walcott was a continual threat and saw a late shot blocked moments before the fourth official indicated five additional minutes.

Vermaelen came agonisingly close with a header that Krul acrobatically tipped over - but the Belgian was not to be denied moments later as Arsenal continued to fight.

With Newcastle retreating Song picked out Walcott on the right, whose cross was only half-cleared to Vermaelen, and the defender swept in from close-range with virtually the last kick of the game.