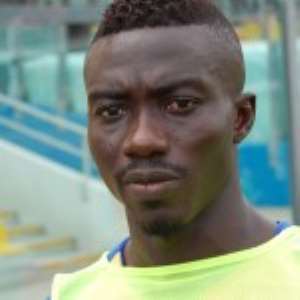 Aduana Stars forward Bernard Dong-Bortey has been slapped with a one-year ban by the Ghana FA, GHANAsoccernet.com can confirm.

The 29-year-old receives the ban for assaulting the center referee during an FA Cup match with King Solomon.

The former Hearts of Oak player was alleged to have hit out at the referee in protest of a decision during the match and was also charged with inciting the Aduana supporters against the officials.

The club however say it is studying the ruling from the Ghana FA's Disciplinary Committee upon receipt of an official notification before making it's next move.

'I can confirm we have taken delivery of a letter from the Ghana FA with the ruling that our player Dong-Bortey has been banned for twelve months,' Operations Manager of Aduana George Gyawu told GHANAsoccernet.com.

'We will review the ruling before determining whether it will be appealed or not.'

Bortey joined the Dormaa Ahenkro-based side three seasons ago from Hearts of Oak where he played a key role in the league title success in 2010.

His latest problems will come as little surprise to those who have followed his career. Undoubtedly talented, Bortey was a bigger star as a teen in Ghana than Michael Essien. The former international has had a chequered career and a habit to self destruct, especially at a time when all is going well with his career.

Just recently, when Kotoko made advances to sign him and he openly expressed his interest in playing for the Kumasi based club, some of the fans of Kotoko who believe the player has once disrespected the club by allegedly taking enticement fee and later signing for Hearts of Oak, vowed not to take it lightly with the management if they signed the striker, and thus scuttling the transfer.

Bernard Dong Bortey last week lauded the national team call-ups to home-based players have given his international career a boost.

At 30, Bortey is confident his qualities can catch the eyes of the Serbian trainer who is expected to be retained as Black Stars coach.

'No. I have not given up on the Black Stars. If the coach sees my performance in the league, I am sure that he will hand me a call-up,' the former Ghana Under-17 star told Asempa FM.

Bortey has six Ghana caps and played a crucial part in the preliminaries qualifiers to the 2006 FIFA World Cup finals in Germany.