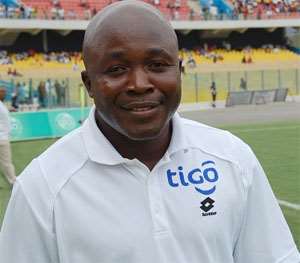 In form Ashgold are talking tough ahead of their mid-week Glo Premiership clash with second-placed Hearts of Oak at the Accra Stadium tomorrow.

The Miners returned from Tarkwa where they snatched victory from Wassaman United with an emphatic 2-0 win last Sunday.

To Ashgold, who are lying eighth on the log, the Wassaman win is enough motivation as they play as guests of worried Hearts of Oak.

'The team is peaking in performance by the day, and hoping to replicate last Sunday's feat against Hearts,' Yaw Acheampong, coach of Ashgold said in an interview.

'Inconsistencies in the game notwithstanding, Hearts' failure to win against Bechem on Sunday has given us added motivation to beat them before their fans,' coach Acheampong added.

In other games, Tema Youth will stay home to play struggling Wassaman United, while Asante Kotoko travel to Dormaa to face Aduana Stars.

All Stars will be the guests of Berekum Chelsea with in form Ebusua Dwarfs traveling to Dansoman to sort things out with Liberty Professionals.