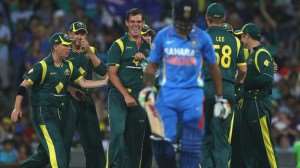 Australia secured their place in the one-day tri-series final with a comfortable 87-run victory over India.

The home side made 252-9 in Sydney, with David Warner top-scoring with 68. They then bowled out India for just 165 in the 40th over, claiming a bonus point for their efforts.

India now need a bonus-point victory over Sri Lanka on Tuesday, while hoping Australia beat Sri Lanka on Friday, to have any hope of reaching the best-of-three final.

Man-of-the-match Warner scored at a run-a-ball in Australia's innings, with wicketkeeper Matthew Wade contributing 56 off 66.

David Hussey appeared fortunate not to be given out on 17 for obstructing a throw for an attempted run out, before going on to reach 54 to take over as the leading run scorer in the series with 338.

India never looked likely to reach their target as they crashed to 104-6 after 27 overs against the well-drilled Australians led by stand-in skipper Shane Watson, who took two wickets for nine runs.

Sachin Tendulkar was particularly unhappy with the manner of his dismissal after his latest attempt to score a 100th international century failed when he was run out on 14 after having to veer around Brett Lee as the bowler charged down the pitch.

Have Confidence In Me, I'm An Honest Leader — Akufo-Addo
36 minutes ago