AFCON Review – Gyan and Ghana: For better, for worse! 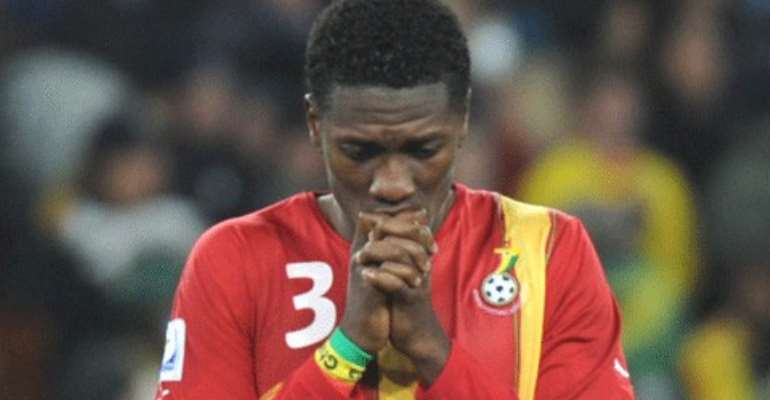 In his previous two write-ups, Yaw Ampofo-Ankrah addressed the imbalance in team selection and the “blame game” syndrome that always seems to engulf Ghana Football when the national team performs below expectation.

In part 3, the unexpected resignation of Asamoah Gyan from the Black Stars occupies his lines.

Part 3 of 4 As the Asamoah Gyan debate rages on, I wonder what Michael Essien and Kevin Prince Boateng would be thinking. Both of them had to take tough decisions about their future with the national team and each took a different path to confront their tormentors. Whether real or perceived is not the issue. They took decisive actions.

Ghana's Asamoah Gyan It looks like history is repeating itself as this week could prove critical and shape the future of the Black Stars for better or for worse. There is a need for calm and wise heads to be in control and not the loose reckless talk that has been forced upon us since the end of the 2012 AFCON.

My position is simple: No citizen is above the state or the flag. Whether it is the first gentleman elect at the Castle, a teacher, a doctor, a politician, a journalist or a footballer we must all be accountable to a degree of scrutiny and accountability in order to ensure the natural checks and balances that personifies the very fabric of nationhood.

Imagine what Ghana would be like if we could all do and say whatever pleases us? The fact that a few politicians have been doing this does not make it acceptable. Their time will come. In the ideal world, we are all equal but in the real world there is no such thing.

Back to the Black Stars. Only God knows what Asamoah Gyan and his PR advisors were thinking with the disaster of a letter to the GFA. I am sure Dauda Tetteh has the best intentions for “Baby Jet” but honestly, he and the player's advisors have made Gyan a laughing stock and stripped the talented player of his hard earned image and reputation.

How Gyan can possibly claim that Ghanaians do not like him is beyond sound reasoning. I love Gyan's grit on the pitch and his undoubted showmanship off it, but this time, the jet has flown into a storm and made a big mistake.

It is wrong and stupid for so-called fans to target a player's family and private life just because that player missed a penalty or even two. We should not condone such primitive and uncouth behaviour but sincerely, what abuse has Gyan suffered that is new?

What about Abedi Pele, Sammy Kuffour, Sulley Muntari, Michael Essien and others who upset public opinion for ”lesser crimes”?

To make matters worse for Gyan, his Public Relations team continue to dig a hole for him. “Whatever he does, the nation does not appreciate,” is a statement again attributed to Dauda Tetteh.

As though this was not enough “[Anytime] they call him [Gyan], if he is okay to play, he will come,” Tetteh added.

Good grief… what ignorance! So now the Black Stars should wait for players to “feel okay” to play before they answer national calls?

I have not read a single insult directed at Gyan by any qualified journalist yet (with all due respect, I mean proper journalists not serial callers or self-styled football experts who follow the popular wind of opinion as it sweeps across media platforms).

Even Samuel Eto'o, at a point, had some abuse in his country. The same applied to Didier Drogba after the 2010 World Cup finals. Yet, these respected African stars always answered their critics back on the field and moved on. Whoever advised Gyan to issue that “class 1” statement has really hurt the boy and not helped him at all with such direction. At best, Gyan should just have stated personal reasons as the excuse, like Kevin Prince Boateng did. But then again, Boateng is quite a different character.

My dear friend Gyan may have forgotten too soon but who does he think voted for him to the win the BBC African Footballer of the year Award? Was it Nigerians, Cameroonians, Ivoirians or Ghanaians? That is the mystery of Ghanaian love and hate for you.

To be fair to Asamoah Gyan, he may not be David Beckham but he should have taken a cue from the long suffering former England captain who dealt with the massive abuse by English football fans. Sometimes, Beckham's wife Victoria would also be targeted. Despite all the tribulations, Becks still remains the biggest ambassador of the Union Jack and English football. Clearly, the young Gyan has lost the plot even if he is angry and sad by the insults.

Instead of apologising for missing a penalty as he did in Germany and move on, the pressure this time appears to have overwhelmed him. Great players come and go but the soul of national teams will always remain. With time, Gyan will heal and return to do what he does best for his country.

As for the abuse, there will always be extremist fans and sadly some in the media who are convinced that somehow, they are more patriotic than our soldiers who put body and soul on the line for the red, gold and green. We must all educate ourselves and be informed before we spew out whatever we have.

The Ghana FA must not fall into the trap that crushed previous administrations when officials “ganged up” against some players and created divisions in the team. Mr Jordan Anagbla is a man of action who has been there and won a World Cup so he deserves respect. But Sir Anagbla, I plead with you to exercise restraint and caution with your utterances and confront the truth with the truth.