Agbeko to fight in Ghana 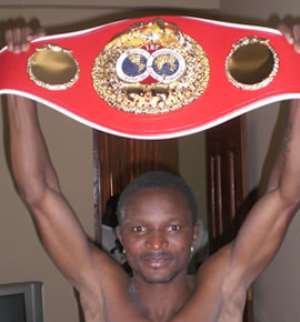 Agbeko is scheduled to fight in May, under the auspices of Golden Concept Management International in May, 2012, at the Accra Sports Stadium.

Manly Spain, Chief Executive Officer of the promotion syndicate who has in recent times organized several boxing bouts in the country, said his outfit has advanced in the arrangement towards the historic event.

He said at a press conference on Thursday, that, they are working the details of the fight and it would be communicated to the boxing fans in the course of the year.

According to the organizers they have received endorsement from the appropriate international bodies and the contract with the opponent of the Ghanaian boxer would also be concluded.

Spain appealed to the corporate world to support the sport to grow, since it has the potential of creating several job opportunities for the youth.

He noted that if corporate bodies would allocate a quarter of what they give to football to boxing, the sport would also be developed to an appreciable level.

Spain said, “it is becoming expensive to promote boxing events in Ghana since people now prefer to watch such events on television than coming to the stadium”.

According to Spain, there is the need for the nation to have a Boxing Arena as the sport cannot develop in the country without proper infrastructure.

“It is time for the youth of this country to rise up and compel the government to provide the nation with a Boxing Arena.”He stated.

He said a Boxing Arena would ensure corporate bodies have their adequate returns for their sponsorship deals because it would provide well defined areas for advertising and TV Rights among others.