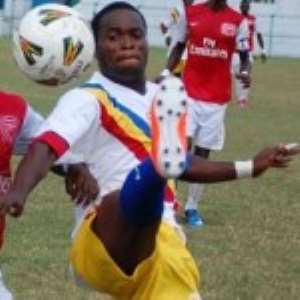 Laryea Kingston marked his Glo Premier League debut with a win as he helped Hearts  of Oak to a 1-0 win against Heart of Lions yesterday.

The Phobians claimed all three points at the Kpando through an 18th minute goal by captain Mahatma Otoo.

Kingston, who is making a return to the league after close to decade has promised to help Hearts leapfrog Kotoko and claim the title.

Berekum Arsenal for the first time this season have slumped to the bottom of the 16-club table after drawing goalless at home to Mighty Jets.

The Gunners' struggles continued at the Golden City Park on Sunday where they failed to find the back of the net in their 0-0 draw with Jets.

Asante Kotoko made it a league double over Medeama in Sunday, beating the Tarkwa side 1-0 at the Sekondi Stadium in the Glo Premier League.

The Porcupine Warriors scored on the stroke on halftime through Ben Acheampong, who powered in a header from a corner kick.

Liberty Professionals and Wa All Stars played out yet another goalless draw in the Glo Premier League last Saturday.

The two sides, after splitting the points in Wa a month ago in their 0-0 scoreline turned up at the Carl Reindorf Park only to reproduce same results. However, the hosts, Liberty had the game's best chances in the second half to open the scoring.

AshantiGold staged a second half comeback to beat New Edubiase 2-1 at the Len Clay Stadium on Sunday in the Glo Premier League.

The Miners fell to a first half goal by the league's top scorer, Emmanuel Baffour. The goal was Baffour's 13th of the season.

However, two second-half strikes through a Didier Kore equaliser and a late Latif Mohammed winners sealed victory for Yaw Acheampong's side, who push up to 10th place.

Godbless Asamoah scored the match winner for Wassaman as the lifted themselves off the bottom of the table. Wassaman were 1-0 winners against Bechem Utd at the Bechem Park.

Despite the win, Wassaman are still caught up in the relegation zone and are just one above the bottom side, Berekum Arsenal.