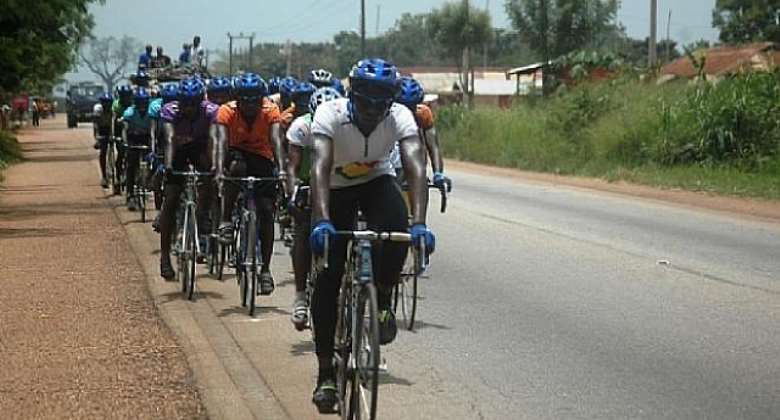 Accra, Feb. 17, GNA -The third stage of the second edition of the ECOWAS Cycling Tour begun in Ghana on Friday with Burkina Faso cyclists making their dominance felt over a strong team of 90 riders from 14 countries from the sub-region.

Rasmande Ouadraogo of Burkina Faso won the overall Yellow Jersey as well as the Green jersey for the Best by Points of the stage with compatriots Bamogo Seydou winning the Orange and Blue jerseys in the Intermediate sprint and as the Youngest Rider, while Kalazebe Caleb of Nigeria.

The Ghana stage of the 110 km of the Tour started from Ada to Sogakope thence the finishing point at the Tema roundabout where Ouadraogo placed first followed by Fofana Issiaka of Cote D'Ivoire, Becaye Traore of Senegal took the third position, Bamogo Seydou of Burkina Faso, fourth and Henry Tetteh Djangmah of Ghana placing fourth.

Mr Clement Kofi Humado, Minister of Youth and Sports said there was the need for fast tracking of the process of accelerating the economic integration and free movement of goods and persons across the sub-region.

The Minister's speech, which was read on his behalf by Worlanyo Agra, Director General of the National Sports Authority, noted that there was the need for the organisers of the Tour to preach peace, free movement, stability, oneness and economic growth amongst citizens of the ECOWAS.

Mr Humado advised the officials to be fair and firm in deciding winners of the races and also implored the cyclists to be respectful, law abiding, patriotic and to abide by the rules and regulations governing the sport and to also refrain from usage of drugs and the tendency to cheat to become winners at all cost.

Mr Francis Chuks Njoaguani, Director of ECOWAS Youth and Sports Development Centre, said that it is the belief that cycling has the capability of achieving sub-regional cooperation amongst the people, which will ensure free movement of goods and service and interaction among the people in the socio-economic development of the member countries.

He commended the Ghanaian authorities for been a constant supporter of ECOWAS events and said the contributions of the security services and media has gone a long way in ensuring that the tour has become unifying factor that has allowed free movement of cyclists through the country's borders.

Mr Shanoon Mohammed, President of the Ghana Cycling Federation said plans are afoot to encourage the youth to take to cycling not only as a sport or recreation but as a healthy life span for the people.

He said the Federation is therefore collaborating with other bodies in the sub-region to use cycling to propagate the free movement goods and services and people of the sub-region and to break the artificial barriers that seem to divide the people.