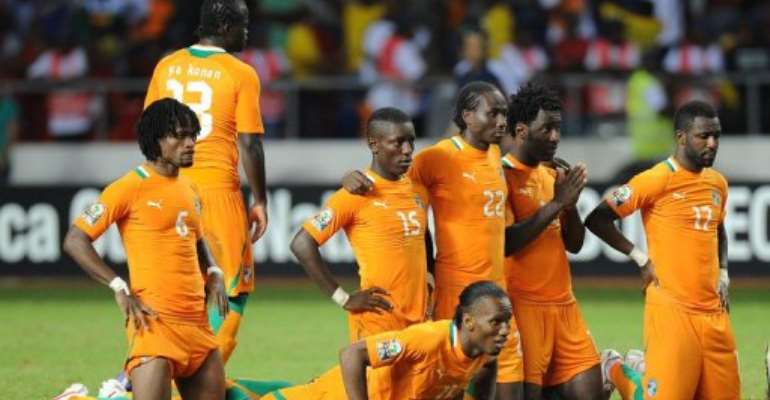 LIBREVILLE (AFP) - Ivory Coast, who yet again failed to fulfil their favourite's tag at the Africa Cup of Nations, head back to Abidjan laden down with disappointment, coach Francois Zahoui said.

The Elephants had come to the 2012 edition with high hopes of atoning for further failures in 2008 and 2010.

But they now head home trophyless, despite having had an opportunity to claim the title in regulation time only for captain Didier Drogba to send a second half penalty high over the bar.

Zahoui said: "The disappointment is enormous annd it's sadness which is the overwhelming sensation.

"We are very upset tonight. I was anticipating a difficult game, I knew it wasn't going to be a walk in the park.

"We didn't start well but we had occasions like the penalty to kill off the game.

Zambia were driven by their desire to honour the national team wiped out in a 1993 plane crash off the Libreville coast, but Zahoui insisted his side too were hungry to win the title for only the second time after 1992.

"The Zambians had a history but we also wanted to win this Cup.

"We wanted to claim the title because of the difficult situation in the Ivory Coast."

Asked if this was the end of Didier Drogba's so-called 'golden generation' Zahoui said: "Off the cuff we can't make a decision like that. The players produced a lot of effort, they gave their all.

"We'll have to reflect on what's happened. We're going to return to Abidjan and reflect on things.

"We have to bring in fresh blood but we'll see about all that with the Federation and take the right decision."

He insisted there were positives to take home from this Nations Cup, despite Sunday's defeat.

"When you produce a competition like we did without conceding one goal (in regulation time) and score nine goals it's hard to accept because we had one hand on the Cup.

"There's a lot of satisfaction as well for us, the players displayed maturity."

He added: "We created chances but luck wasn't on our side. But that said, not to concede a goal in the whole competition is some feat.

"The penalty shoot-out is a lottery.

"As for the veterans we'll have to see if they want to continue, it's a personal choice."