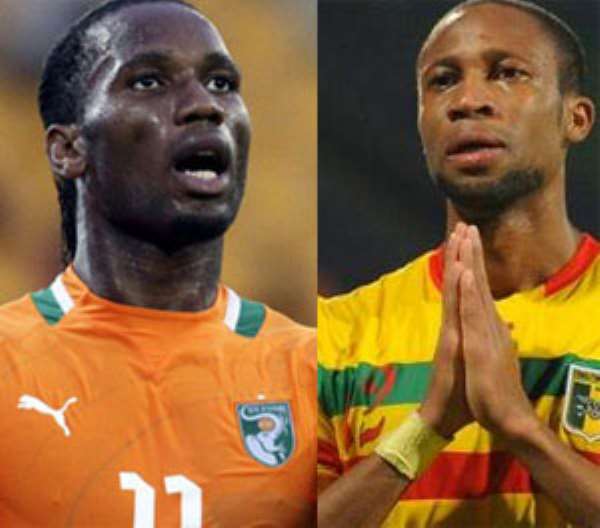 Cote d'Ivoire are now just two games away from fulfilling their potential, again insisting they are taking slowly their quest to win the African Nations Cup.

Didier Drogba and his teammates start as runaway favourites for the semifinal against Mali today but have not let the prognostics go to their head.

A cautious approach to all their games reflects the safety first policy adopted by coach Francois Zahoui, desperate to ensure the Ivorians first make sure they keep a clean sheet before they worry about scoring goals. To date they have yet to let in a goal in the tournament in Equatorial Guinea and Gabon.

Even Mali are making them the favourites for the clash at Libreville's brand new stadium.

'Les Aigles' coach Alain Giresse called the Ivorian side 'the Brazil of Africa' and heaped praises on the depth of quality players in their squad.

'It is a game that we have to approach with some circumspection but we see it as a challenge. We will take it slowly and look to match them in all departments,' he told reporters after his side squeezed through to the last four by beating Gabon on post-match penalties in Sunday's quarter-final in Libreville.

Mali will look to the talisman Seydou Keita to lead their lead and probably reinstall Cheick Tidiane Diabate in attack after leaving him on the bench for the start of the Gabon game. He came on to score.

The Ivorians have the advantage of having rested key players in their last group game a week ago and then also having played a routine 90 minutes on Saturday when they disposed of Equatorial Guinea.

Mali, in contrast, had the energy-sapping experience of going through two hours of football plus a penalty shootout before advancing to the final four for the first time since 2004.