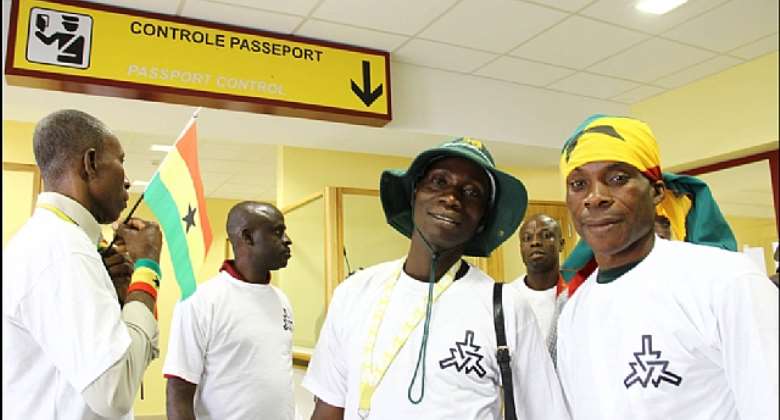 Accra, Feb. 7, GNA – For the second time running, Wienco Ghana Limited, a leading agro-based company, has flown a number of hardworking Ghanaian farmers to enjoy the thrills of the ongoing 2012 Confederation of African Football (CAF) tournament.

The first batch of farmers was in Gabon to watch the game between Ghana's Black Stars and Carthage Eagles of Tunisia, during which Ghana's national team emerged victorious with a 2-1 margin.

Ghana is therefore through to the semi-final stage of the competition.

Wienco is expected to fly a significant number of farmers to view the tournament being hosted in Gabon and Equatorial Guinea.

During the 2010 World Cup in South Africa, Wienco flew a number of farmers to watch the event.

Wienco also sponsored farmers to watch the 2008 Ghana-hosted African Cup of Nations, during which it made available more than 16,000 tickets to the beneficiaries.

The gesture is meant to strengthen the fraternity between Wienco and Ghanaian farmers.

The exciting thing about the trips is that it offered most of the farmers the opportunity to fly for the first time and they expressed gratitude to Wienco for the goodwill.

“It was a mixture of excitement and apprehension of getting onto an airplane for the first time. But once the plane was airborne and the Pilot and his crew gave us a rare opportunity to visit the Cockpit, our nerves were calmed,” one of the farmers told journalists on condition of anonymity.

“We congratulate Wienco for taking such an unusual initiative to reward the hard work of Ghanaian farmers,” he said.

In a pre-departure interview, the Managing Director of Wienco, Mr Marc Kok said flying farmers to watch the matches was to thank and encourage them to keep up their hard work, adding that football is a good platform to do so.