By Nick Reeves
Cup of Nations 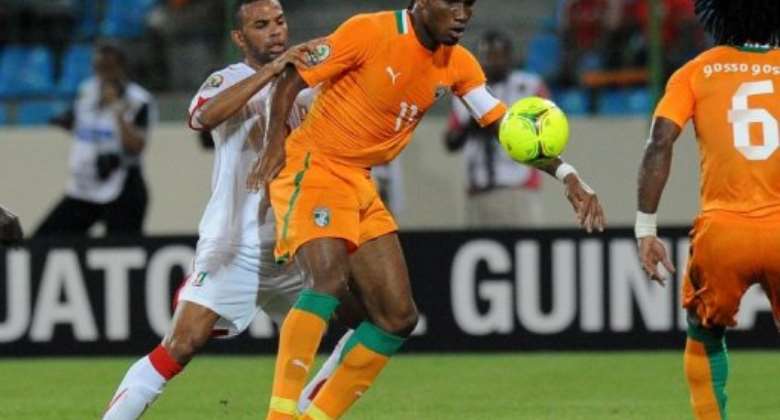 LIBREVILLE (AFP) - A Didier Drogba-inspired Ivory Coast and Zambia eased into the semi-finals on day 15 at the Africa Cup of Nations.

That Malabo quarter-final on Saturday came after Zambia had downed 10-man Sudan by the same scoreline over on the mainland in Bata.

The Ivorians will meet the winner of Sunday's quarter-final in Libreville between Gabon and Mali, with Zambia's reward a last four date with either Ghana or Tunisia.

Both games were preceded by one minute of silence in memory of the 74 Egyptian fans who died at the Port Said stadium slaughter on Wednesday.

In Malabo, the country's president had dispatched his marabouts (holy men) to bless the pitch on Friday and the move apppeared to have worked a treat when keeper Danilo saved a Drogba penalty.

But the 33-year-old Chelsea icon kept his cool to atone for that misshap, striking with his right foot on 36 minutes and his head on 69 as the Elephants made it four wins in four matches.

African Footballer of the Year Toure completed the scoring nine minutes from full-time with a superb goal off a set piece, curling the ball over the wall and Danilo to send home supporters streaming to the exits.

It was a predictable outcome to a match that never scaled dizzy heights with the Ivorians fielding stars from some of the top leagues in Europe while the Equatoguineans relied heavily on Spanish lower-league footballers.

Drogba said he had had to pull himself together after his missed spotkick.

"My teammates encouraged me and supported me a lot. I had to get back into the game and I owed them these goals. I am happy to have produced the goods for them and I am proud of my colleagues."

Ivory Coast coach Francois Zahoui said: "We suffered more than we might have expected. We knew we had to win the midfield battle. We knew we had the players up front who could make the difference.

"Another team would have lost because I saw a very good Equatorial Guinea side out there. Happily for us, Didier made the difference and we came through."

"I am pleased with my team's work. We lost because we came up against a very strong team. Now we have to look to the future."

Earlier, at a depressingly-near empty stadium in Bata Stoppila Sunzu, Christopher Katongo and James Chamanga scored to put Zambia on a semi-final collision course with either Ghana or Tunisia.

Favourites Zambia were rarely under pressure and Sunzu took advantage of slack marking to nod them ahead on 15 minutes, Katongo scored the second midway through the second half and substitute Chamanga added a late third.

Sudan had Saif Eldin red carded 19 minutes into the second half when his team were trailing by one goal and his dimissal signalled the end of any hope the Jediane Falcons had of causing an upset.

"This is the match we were expecting, a difficult game," said Zambia coach Herve Renard.

The Frenchman added: "We went to sleep a little bit in the second half, then as so often Rainford Kalaba gave us some light, we won a penalty and they were down to 10 men, which made the job easier.

"All was not perfect today, but you have to be efficient, and in football that's the most important thing."

His Sudanese counterpart, Mohamed Abdulla Mazda, commented: "This tournament has been a success for us, we achieved our aim. Since 1976 we hadn't got a point or scored a goal....

"Unfortunately we lost players to injury, and the penalty changed everything.

"We need more experience to reach the semi-finals."

Court issues warrant for arrest of Xavier Sosu for 'disrespe...
33 minutes ago