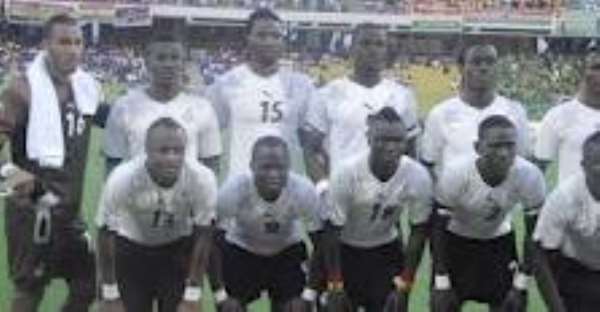 Franceville, Gabon, Feb 2, GNA - Ghana' s credentials of winning a fifth Nation Cup was put to test by Guinea when both clashed in a one all game played at the Franceville Stadium on Wednesday.

The Stars were made to sweat even with numerical advantage to stay on top of Group D with seven points and set up a meeting with Tunisia in the last eight stage, beginning at the weekend.

Guinea who required a win to progress had looked the better of both sides, for the greater part of the game and in the first half, with Traore Ibrahima combining forces with Camara Abdoul to terrorise the Stars defence using the lateral backs effectively.

Creative Ibrahima' continues terror on the Ghana's defence, justifiable earned tournament debutant, Massawudu Alhassan at left back, a yellow card early in the game compelling Coach Goran Stevanovic to ask Daniel Opare and Lee Ardey to warm up in anticipation of a change that never was.

The Black Stars hardly responded on a day that the team looked absolutely off-colour though occasionally, attempted a surge which produced nothing.

But out of almost nothing, Ghana earned a corner kick 26 minutes on. Andre Ayew took a short one to Samuel Inkoom who started ahead of Sulley Muntari squared on to advancing Emmanuel Agyeman Badu, whose spectacular volley fetched the opener that will go into the books as one of the best goals of the competition.

The goal brought some stability in the Stars quest and the confidence that came with it sent them controlling the game only for a while.

Soon, the Sylli Nationales were to take over; making goalkeeper Adam Kwarasey the busiest person on the pitch with a spate of ten minutes, where he was forced into making three incredible saves in succession.

It was almost tempting to think the goalkeeper who had show frailties in the first game had finally gained the tonic to boost his confidence going forward in manner he pulled off those saves.

Half time was almost arriving and the scanty Ghanaian supporters dotted around the Stadium amplified their cheering of going into the break with a fine lead, but Guinea had other ideas.

Abdoul, picked up with a long cross from the heart of the field, outpaced John Painstil just when a cross was widely the usual expectation, he lobbied over Kwarasey, who had moved a little from his line to pull parity on the stroke of half time.

The Stars deflated by the goal will be the first to step out from recess, signaling their intention to restore the lead which never was.

The second half was that eventful. Guinea's Bah Mamadou Dioulde was giving the matching orders for a crude tackle on Painstil but the numerical advantage did not tell in Ghana's play.

Instead, it was Guinea that poured out for another goal in their quest to make the final eight at the expense of Mali who was leading Botswana 2-1 in the other group fixture played simultaneously in Libreville.

Ghana will now meet Tunisia while Mali clash with co- host Gabon in the quarter-finals.