Guinea back on track after Botswana mauling 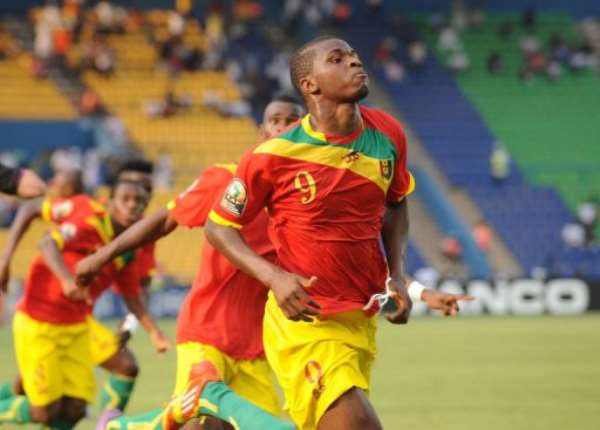 Guinea were matching the record victory margin for a Nations Cup match and are only the third team after Egypt in 1963 and Ivory Coast in 1970 to have scored six goals in a tournament match.

The Syli National, who lost their first Group D game to Mali, fired four first-half goals past debutants Botswana, who narrowly lost 1-0 to Ghana in their opening match.

Guinea, on three points, will on Wednesday take on Ghana in the final batch of Group D games in Libreville, while Mali tackle Botswana.

Guinea enjoyed more of the early play and in the 14th minute, goalkeeper Modiri Marumo was called to make the first save off a powerful shot from outside the box by Mamadou Bah.

They took the lead one minute later when Sadio Diallo finished off a low cross by the tricky Abdoul Camara from the left.

Dipsy Selolwane drew Botswana level in the 23rd minute from the penalty spot at the second attempt after Jerome Ramatlhakwana was brought down inside the box by Guinea goalkeeper Naby Yattara.

Selolwane was back after serving out a one-match suspension.

In the 27th minute, Diallo scored his second goal for Guinea when he connected with another low cross from the left by the fleet-footed Camara.

Camara made it 3-1 for Guinea in the 42nd minute when he followed up a quick free kick by Pascal Feindouno before he fired a low shot past the diving Marumo from a very tight angle.

Botswana substitute Patrick Motsepe saw red for dangerous play in first half stoppage time, when he fouled Feindouno on the edge of his goal area.

And from the resulting free kick, Ibrahima Traore, always a constant danger against The Zebras, netted Guinea's fourth goal after four minutes of additional time to worsen Botswana's problems.

Diallo should have got his hat-trick in the 55th minute, but he blasted wide off target when he was clear on goal.

Four minutes later, Feindouno's shot crashed against the underside of the Botswana post and television replays later showed that it should have been given as a goal for Guinea.

Ismael Bangoura missed an easy chance to extend Guinea's lead in the 69th minute after he turned past his marker sharply inside the box only to misdirect his shot.

Bah made it 5-1 in the 84th minute, when he thundered home from 24 metres after he was set up by the impressive Camara.

Two minutes later, Naby Soumah added to Botswana woes with a sixth goal as he shot home from inside the box.