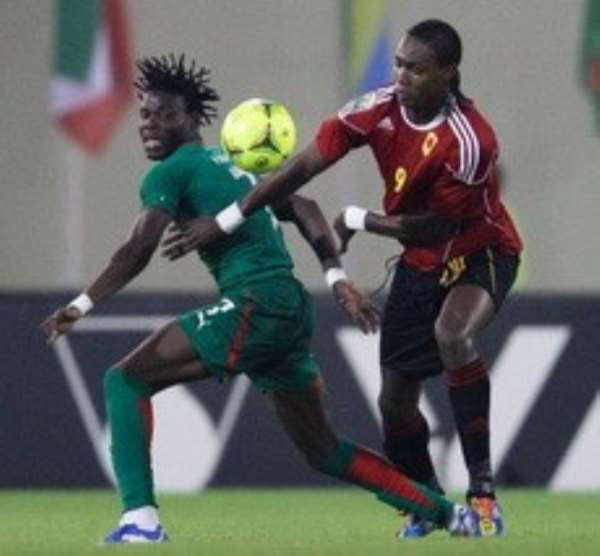 Angola joined Ivory Coast in winning its opening match at the African Cup of Nations on Sunday by beating Burkina Faso 2-1 from Manucho's long-range strike in the second half.

The former Manchester United forward struck in the 68th minute after Alain Traore had leveled for Burkina Faso from a free kick in the 57th.

Mateus Da Costa had put Angola ahead in the 48th following a forgettable first half. Both Angolan goals came from defensive blunders.

Both teams were happy to defend in numbers however, and clear chances in the first half were rare.

Angola made the breakthrough when Burkina Faso's Bakary Kone dithered with a clearance, allowing Da Costa to recover the ball on the edge of the box. The Portugal-based forward beat his marker and drove a right-footed shot across goalkeeper Daouda Diakite.

The game suddenly became a more interesting affair, and Traore equalized from 30 yards with a left-footed shot that went over the defensive wall and into the bottom corner.

Burkina Faso's defense was again at fault for the second goal with Djakaridja Kone presenting the ball to Manucho just outside the box. He still had plenty to do as he took a touch to his left, but produced a fierce drive to beat Diakite and restore Angola's lead.

Burkina Faso pushed for an equalizer with the best chance falling to Dagano, who sent a downward header straight at goalkeeper Carlos Fernandes in the 81st.