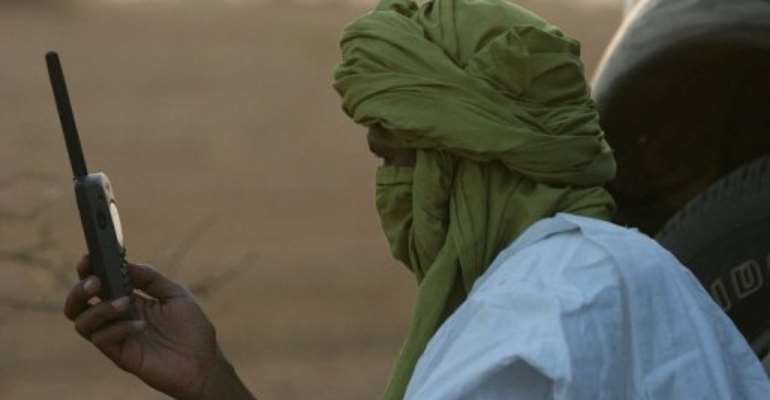 A Tuareg checks his satellite phone in the North Malian desert. By Georges Gobet (AFP/File)

BAMAKO (AFP) - Mali's army said Wednesday it had fought off attacks by Tuareg rebels, some of whom recently returned from fighting in Libya and have launched an offensive to seize several northern towns.

Fighting erupted in the towns of Aguelhok and Tessalit in the morning, keeping residents indoors as gunfire was exchanged, a day after the army said it had fought off an attack in the town of Menaka by bombing rebel positions.

"Contrary to what the attackers say, we have forced them to withdraw in Tessalit and Aguelhok," a military source from the regional army headquarters in Gao told AFP.

Army officer Lieutenant Oumar Toure said the military "would not allow anyone to meddle with Mali's sovereignty. The instructions are clear: Don't hurt civilians, but use all your energy to hunt down the criminals."

"Our aim is to flush out the Malian army in several northern towns," said a Tuareg rebel spokesman, who called himself "Moussa Salam", in a telephone interview.

On Tuesday fighting lasted several hours as rebels tried to seize control of Menaka, south of Aguelhok, which is not far from the Niger border.

Army helicopters bombed rebel positions, forcing them to withdraw to a forested area near the town, however the Tuareg maintained they held control of the town's two military camps.

On Wednesday shops were closed in the town and sporadic shooting was heard near a camp on the outskirts of the town, a local journalist told AFP.

"For the moment it seems as if the rebels are in control," he said.

The Gao military source said reinforcement had arrived in Menaka on Wednesday and would "occupy one of the camps."

Government reported the deaths of several Tuareg and one soldier during Tuesday's fighting.

In a statement it said the assailants "included forces that returned from Libya and comprised elements known as the Azawad National Liberation Movement (MNLA)."

Hundreds of armed Malian Tuareg recently returned from Libya where they fought alongside troops of ousted leader Moamer Kadhafi.

The MNLA is a movement with no known leader which was founded at the end of 2011 after a fusion of rebel groups, including the Northern Mali Tuareg Movement (MTNM) whose leader died in a road accident last year.

"This new organisation aims to free the people of Azawad from the illegal occupation of its territory by Mali," the organisation said in its first press statement in October 2011.

The Azawad, a region considered the birthplace of the Tuareg, stretches from the west to the north of Mali.

After these rebellions many fighters left for Libya where they were integrated into Kadhafi's security forces. After his fall they returned to northern Mali, particularly the Azawad region between Timbuktu and Kidal.

The return of the rebels has added to northern Mali's woes as the region battles Al-Qaeda in the Islamic Maghreb (AQIM) which has carried out many attacks on troops, kidnappings of Westerners and various trafficking operations, including drugs.