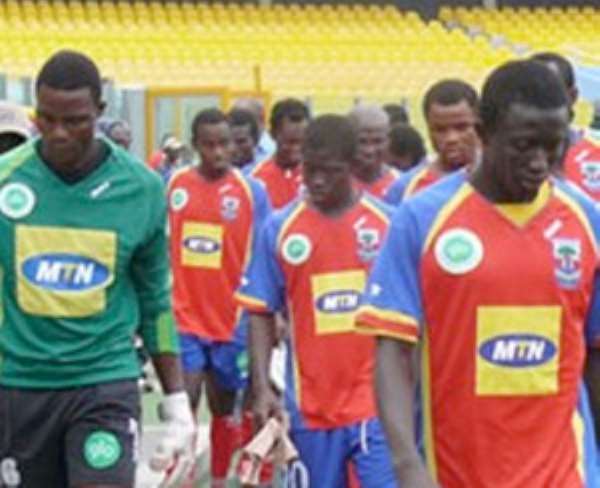 Accra Hearts of Oak yesterday recorded a 3-2 win over 10-man Obuasi Ashgold to inch closer to their arch-rivals on the league log.

The victory bridged the two point gap between leaders Asante Kotoko who drew 0-0 with Aduana Stars before home fans in the Garden City, Kumasi.

Hearts managed just a goal through left-footed Douglas Nkrumah from a spot kick 14 minutes to recess after creating many goal-scoring chances.

Of course, goalkeeper Fataw Dauda's timely saves accounted for the slender results. The Miners, on the other hand hardly troubled Hearts' rear.

Both sides improved after the break but Hearts was slightly ahead tactically and it resulted in the home side's second goal fetched by striker Mahatma Otoo.

A similar opportunity came the way of Ashgold to pull even but Adjei was alert this time around.

Isaac Ofori increased the tally to cushion the Phobians lead in the latter part of the game with a powerful left footer to beat goalkeeper Dawda.

The visitors kept pushing forward and one of their raids paid off through Yakubu Mohammed who scored a personal and the team's second in injury time when his free kick deflected to beat keeper Adjei.