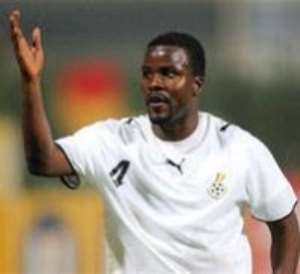 Former Ghana and Bayern Munich star Samuel Osei Kuffour, has brought his eventful football career to an end with a memorable testimonial match played at the Baba Yara Sports Stadium in Kumasi on Friday.


The high-profile match played between a Kuffour-select side and the Senior National Team, the Black Stars, ended 6-5 in favour of the latter and was well-attended by a cross section of former football internationals, as well as some notable personalities.

Ex-World, European and African Footballer of the Year, George Oppong-Weah, former Ivorian Internationals Abdoulaye Traore and Alain Gouamene, as well as Camerounian International Patrick Mboma were on hand to give support to the match as they featured for the Kuffour-select side.

Kuffour came into the limelight during the FIFA Under-17 World Cup in 1991 as he contributed immensely to enable the Ghana Black Starlets lift the trophy in Spain.

His football career which spanned over a period of about 18 years saw him achieve so much for country and club, featuring for the Senior National Team in Ghana’s first-ever World Cup appearance at the 2006 Championship in Germany.

He also helped Bayern Munich win the UEFA Champions league in the early part of 2000 and went ahead to annex the World Club Championship, scoring the winning goal for the Bavarians.

It was all joy as the ex-Ghanaian International was joined by members of the victorious 1991 Starlets team to honour the match, including Nii Odartey Lamptey, Yaw Preko and George Owu.

Kuffour who was beside himself with joy had no option than to shed tears soon after the National Anthem had been played, drawing mixed feelings from the spectators.

A citation presented to him by the Government and people of Ghana through the National Sports Authority read “You are the only male footballer to have played in all the National teams. You stood for fairness and transparency as a player.

As a player, you became a role model for the youth on and off the pitch as you lifted high the flag of Ghana. The National Sports Authority and people of Ghana say “Ayekoo” (Well done) to you on your retirement from active football.”

On the match itself, the Kuffour select-side gave glimpses of how deadly some of the ex-internationals used to be in their active playing days with brilliant touches and goal-scoring techniques much to the delight of the spectators.

Soon after the Asantehene had kicked-off for the commencement of the match the two sides went into action but it was Kuffour who opened the scoring for his side in the 18th minute, scoring from the penalty spot after George Weah was brought in the goal-scoring area.

C.K. Akunnor, Laryea Kingston, Abdoulaye Traore and George Weah were all on the scoring sheet in the 33rd, 44th 73rd and 79th minutes, respectively.