Kotoko to Have it Tough against All Stars 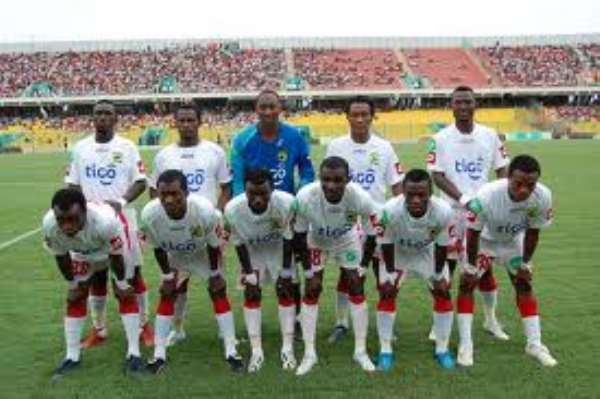 The 'Porcupine Warriors' Kumasi Asante Kotoko travel to the Upper West region to play as guest to Wa All Stars in the toughest match of the week 12 Glo Premier League (GPL).

Asante Kotoko are on top of the table with 24 points and may be looking forward to extending their lead before the Christmas break but All Stars who are also occupying the third spot with 20 points are not push over's when it comes to playing in front of their supporters.

The home side lost to Kotoko last season after loosing their front man Nathaniel Ohene Asamoah to the pride of Oseikrom but sources from the Upper West said All Stars are battled ready for Kotoko and are going to make them run for 90 minute. A draw looks likely in this encounter but should things work well for Maxwell Konadu then the visitors will surely run with a slim win.

At the Tema Community Three Park, Tema Youth will welcome former continental club masters Accra Hearts of Oak. Both Tema Youth and Hearts needs the three maximum points to prepare their supporters' Christmas meal especially the phobians who are still bent on wrestling the league from their arc rivals Kotoko.

Tema Youth are tenth on the log with 14 points whilst Hearts of Oak are second with 21 points. Tactically the home team is strong but physically Hearts are also astute especially in the middle where they have the likes of Moro Abubakari, Thomas Abbey, Douglas Nkrumah, and the young but skillful Isaac Ofori

Hearts of Oak have battled in recent times any time they play at the Tema Park and Sunday's match will not be a different story. A win for Tema Youth can quash Hearts hopes of clinching the trophy and this can ginger the phobians to picking a point in Tema but Tema Youth will also fight hard for the three points. At the end of the day I see both clubs sharing the three points.

At the Osahene Agymang Badu Park in Dormaa, Aduana Stars will host Mysterious Ebusua Dwarfs in a match which promises to be full of fireworks. Aduana are seventh on the league table with 17 points whilst the visitors are fifth with 18 points.

Dwarfs are facing some internal wrangling in their management and if this is not solved earlier it will go a long way in hunting them in the face. Aduana are quite strong at home and can add salt to Dwarfs' injury.

The scientific soccer lads Liberty Professionals will play as host to New Edubiase at their favorite Carl Reindorf Park in Dansoman. Liberty is eighth on the table with 16 points whilst their opponents are sixth with 18 points.

Liberty have enjoyed a good season at home and may be looking forward to add New Edubiase to their snick of conquerors but should Emmanuel Baffour who has gained a call up into Plavi's 25-man provisional squad for the Nations Cup find his rhythm then the story could be different.

Defending league champions Berekum Chelsea will welcome Hearts of Lions to the Golden City Park. Chelsea's hope of defending the crown was partially quashed by Kotoko last Wednesday when the champions bowed to the porcupine warriors at the Baba Yara stadium.

On the other hand, Hearts of Lions are also not enjoying the best of the season and are currently lying at the eleventh position with 13 points whilst Berekum Chelsea have slipped to the fourth spot with 19 points.

At the Essipong stadium in Sekondi, SC Medeama may enjoy an easy ride over new entrant Wassaman United. Medeama occupy the ninth position with 15 points whilst Wassaman are last on the log with just seven points from eleven matches played.

Soccer miners, Ashantigold will play as host to Mighty Jets at the Obuasi Len Clay Park. The soccer miners are still not settled in the league as their faith keeps dwindling by the week.

Ashantigold are twelfth on the table with 11 points whilst Mighty Jets on the other hand are just behind them on thirteenth position with 10 points. A win for Ashantigold is likely but Mighty Jets can pull a surprise all the same.

A draw in this match will be a fair result but should the strikers of Arsenal have their day then the visitors will run away with a slim win.