Hearts On Redemption Mission …Kotoko In Action In Tanzania Today 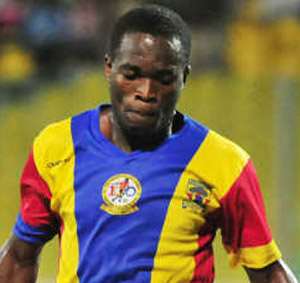 An opportunity has presented itself to Accra Hearts of Oak to redeem themselves when they host eighth-placed Medeama SC at the Accra Stadium tomorrow.

And that will certainly placate their fans who are yet to recover from the 0-2 loss to Liberty Professionals on home soil six days ago.

A close monitoring of the Phobians, occupying position four on the standings with 18 points reveals a side that are bent on going all out not just to win but win convincingly to occupy the summit, at least till the current occupants, Asante Kotoko, who are out of the country, get back and Chelsea, clear their outstanding match.

Certainly, that will serve as a huge tonic for the technical team and the playing body alike to diffuse the pressure which seems to have crept into their fold after their centenary game defeat to Nigerian side, Enugu Rangers.

They however bounced back to record an historic away win in  against Wa All Stars in Wa, and indications are that, there is nothing on the minds of the Phobians aside an emphatic win to call off the Medeama bluff, a side that has proved tough customers to the home side. Hearts have won three as against one in their four meetings in Accra.

Another game expected to produce intense fireworks is the Ebusua Dwarfs-All Stars game at the Robert Mensah Park. The visitors' impressive away record vis-Ã -vis the home side's home invincibility has placed the clash among the topical issues in sporting circles this week.

Today at the Accra Stadium, Mighty Jets will host Tema Youth, while Bechem United travel to Kpando to battle Heart of Lions. Arsenals will stay at the Golden City Park to face Ashgold with Liberty Professionals traveling to play Wassaman. At Bekwai, New Edubiase will cross swords with Aduana Stars.

Meanwhile, the Kotoko-Chelsea game has been put on hold following Kotoko's international friendly assignment in Tanzania. Kotoko play their Tanzanian opponents today as part of their hosts' 50th anniversary.