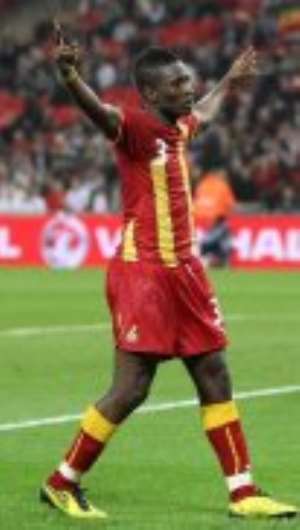 Ghana striker Asamoah Gyan has said that keeping his current form at club level is most important for him as the Africa Cup of Nations draw closer.

The 26-year-old has been Ghana’s lone ranger upfront for some time now and maintaining good shape ahead of the continental showpiece is crucial as Ghana seek to end a run of close to 30 years without a trophy.

The on loan Sunderland forward told KickOffGhana that he is upbeat after having found his scoring boots once again and he hopes that his form will translate into something positive at the 28th edition of the Nations Cup.

'I'm feeling good right now getting myself in form and keeping my fitness level up,' Gyan said.

'It is important not only for my team Al Ain but it's also preparing me for the AFCON, where I am hopeful of scoring goals for my country.'

Ghana have been tagged as favourites for the tournament in Gabon and Equatorial Guinea, with a great deal expected from the ‘Baby Jet’ after he starred for the Black Stars at Angola 2010 and the World Cup in South Africa