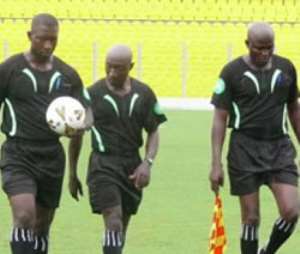 Accra, Dec 08, GNA - The Referees Appointments Committee of the Ghana Football Association (GFA) has appointed, referee O. B. Amankwah as the center man for the match between Accra Hearts of Oak and Medeama SC at the Accra Sports Stadium on Sunday, December 11.

According to the RAC, referee Amankwah will be assisted on the lines by Ibrahim Badiu Adam and Michael Agbenuzah, with back from suspension Vincent Otoo as the fourth referee.

Samuel Kyeremeh Yeboah has been handed the Tudu Mighty Jets and Tema Youth encounter at the Accra Sports Stadium on Saturday, December 10, with assistance from Sulemana Abudu and E.T. Allotey, whilst Yaw Ametepe takes up the role of the fourth referee.

The game between Heart of Lions and Bechem United at the Kpando Park, will be handled by Sumaila Ibrahim, with Sam Borquaye and Osei Agyeman to be on lines one and two respectively while Frederick Bediako acts as the fourth referee.

At the Golden City Park in Berekum, S. B. Bortey will direct affairs from the middle with assistance from Beatrice Thaud and Robert Dodoo on the lines, as Reginald Lathbridge assumes the fourth referee role and at the Essipong Stadium, Sekondi, Awal Mohammed will be in the middle to be assisted by Haruna Ayuba and John Hodzade on the lines, with Fred Andoh as the fourth referee in the game between Wassaman United and Liberty Professionals.

The game between New Edubiase FC and Aduana Stars at the Gyamfi Park, Bekwai will be under the supervision of Dan Laryea as the center referee, with Dawood Quedrago and Shine Aryitey as his assistants, whilst Joe Baffoe will be the fourth referee.

The Cape Coast Ebusua Dwarfs and Wa All Stars game at the Cape Coast Stadium, will be officiated by Jonathan Tetteh with Kennedy Sarfo Adade and Reuben Laryea on the lines, with Franklin Cobbina as the fourth referee.