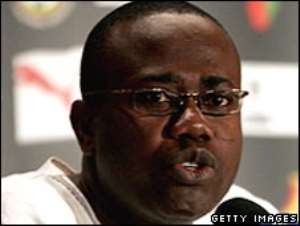 GFA PRESIDENT Lawyer Kwesi Nyantakyi has vowed to do everything in his power to ensure that African players plying their trade in Europe are released by their clubs for the 2012 Africa Cup of Nations.

The CAF Executive member said it was illegal for any European club to serve as an impediment in the way of African players that had been invited by the countries to take part in the tournament.

Lawyer Nyantakyi said he would personally take the matter up at CAF level and even extend it to FIFA to ensure that African players billed to take part in the tournament were not prevented from doing so by their clubs in Europe.

According to the GFA Boss, the Africa Cup of Nations was the biggest and most watched football tournament on the African continent; therefore nobody should be allowed to mar the beauty of the tournament.

Lawyer Nyantakyi stressed that every player on the continent who had been invited by his national team should not be unjustifiably prevented from taking part in the tournament by his employers in Europe.