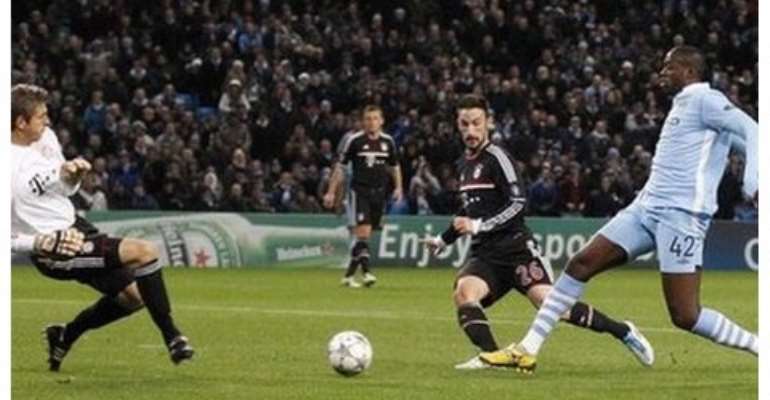 Manchester City crashed out of the Champions League despite a polished win over an under-strength Bayern Munich.

David Silva fired in from 20 yards before Yaya Toure surged through to double their lead after the break.

But Napoli's win at Villarreal sent them through alongside group winners Bayern and ensured that Roberto Mancini's men will have to compete in the Europa League.

They will be joined in the competition by rivals Manchester United.

United failed to progress after a shock 2-1 defeat to FC Basel and both Manchester clubs will now have to juggle a Premier League challenge with Thursday night European action.

Mancini's side controlled the game at Etihad Stadium but had left themselves too much to do after earlier defeats in Munich and in Napoli last month.

And City immediately took control, Sergio Aguero heading over at the end of a flowing move before Silva opened the scoring in fine style.

Gareth Barry's pass was flicked on by Edin Dzeko and after taking a touch on his chest, Silva thrashed a half-volley into the corner from the edge of the box.

Toure made it 2-0 in the second period after running onto Dzeko's through-pass and City looked set for the last 16.

However news of goals by Napoli midfielders Gokhan Inler and Marek Hamsik in Spain filtered through to numb the atmosphere and leave Mancini to contemplate a Europa League campaign.

Election 2020: Only Uniform Personnel Will Be Deployed – Gha...
12 minutes ago