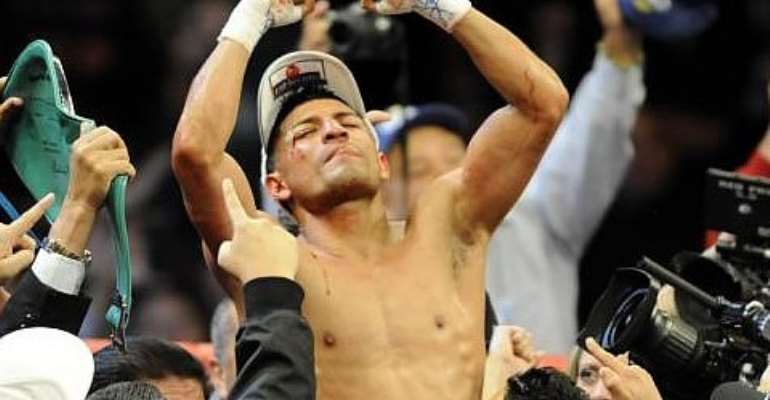 There was no controversy this time round except Agbeko, who was a much improved fighter from their controversial August clash, did not sound too intelligible 'retaining' his claim he remains the 'true champion' and suggesting the results was unfair.

All three judges had scored the fight 118 – 110 for Mares, and the winner was more convincing this time he deserved the call.

The bout in many respects was the moment of truth and redemption for Agbeko who lost his title to the Mexican under very dubious circumstances in August but on the night the Ghanaian did not do just enough to wrestle the title.

He started well though with a hefty left jab in the second round which opened a deep cut on the right eyebrow of the Mexican and left him bleeding all through the bout but Agbeko failed to make the most of it.

Mares looked a bit subdued in the opening rounds and more careful with his punches this time, having gained the reputation for his comedy of low-blows.

Gradually he got back into his rhythm with his hard hitting, this time, orthodox punches which Agbeko failed to counter.

Mares was aggressive and efficient; Agbeko was slow to react and relied too heavily on his weaker left jab instead of his powerful right hooks.

The bout wore-on slowly and very close but Mares made the most of the rounds with his definite punches.

Agbeko got back strongly in the seventh and eighth rounds with his definite jabs which messed up the bloody face of Mares.

Round eleven was electric. Both men traded heavy punches, each trying hard to steal the round but the Mexican did enough to win it.

It was almost obvious Agbeko needed something more, a dramatic knockout in final round to make an undisputed claim to the title. But that did not happen. Mares looked hungrier in the final round and shot quick body punches at Agbeko. Agbeko retaliated but did not make that impact he ought to have made.

Mares, despite a close victory eliminated all doubts who the champion of the Bantamweight division is.