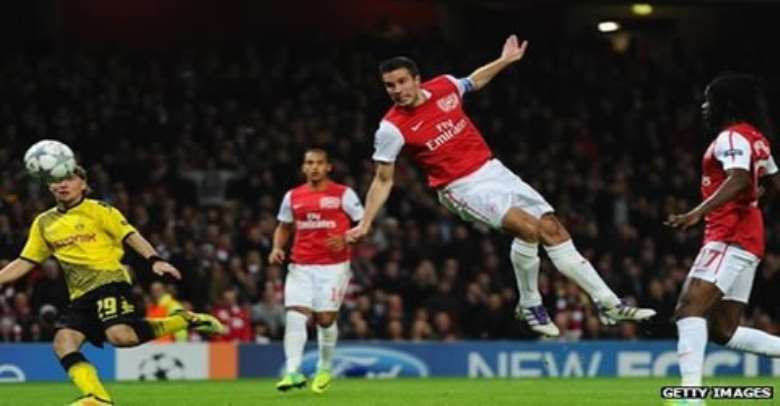 Arsenal halted Wigan's mini revival with a crushing win at the DW Stadium.

Wigan made a promising start but two goals in two minutes punctured their hopes with Mikel Arteta's swerving long-range shot putting Arsenal ahead.

Ali Al-Habsi might have saved Arteta's effort and the Wigan keeper was soon beaten by a Thomas Vermaelen header.

Gervinho scored the third after after Al-Habsi parried a Robin van Persie shot, and the Dutchman added the fourth after good work from Theo Walcott.

It is a defeat that leaves Wigan, who had picked up four points from their previous two games, firmly rooted in the relegation zone, while Arsenal keep in touch with the pack chasing Premier League leaders Manchester City.

The worry for Wigan is how impoverished they are for attacking options, with Van Persie now having scored two more league goals this season than Roberto Martinez's side have managed during the entire campaign.

Initially Wigan's recent improved form was reflected in a bright start with Conor Sammon and Victor Moses causing problems for an Arsenal side that took time to settle into their passing rhythm.

That Wigan did not go ahead was largely due to the quick reactions of Andre Santos, who deflected Jordi Gomez's shot away for a corner after Wojciech Szczesny pushed away a David Jones cross.

Wigan were unable to build on that dominance and slowly but surely Arsenal began to assert their midfield authority, with Arteta prominent.

And it was the Spaniard who gave Arsenal the lead as his right-footed shot beat Al-Habsi, with the ball passing through the Wigan keeper's hands.

A minute later and Arsenal established a two-goal cushion as Vermaelen's header was too powerful for Al-Habsi, going in off the post.

That second goal resulted in Wigan going into a defensive shell and only Al-Habsi's fine reaction save from a Van Persie shot prevented the home side from an even wider half-time deficit.

Briefly after the restart Wigan recaptured some of their earlier confidence as Moses fired in a cross from the right and Mohamed Diame went close with a shot.

But these were momentary moments of alarm for Arsenal, who claimed they should have been awarded a penalty when Aaron Ramsey went to ground after a challenge from Steve Gohouri.

Gervinho had proved a persistent threat to Wigan - he had produced a delightful weaving run in the first half - and the Ivory Coast forward then showed his goalscoring prowess as he prodded home after Al-Habsi had pushed away Van Persie's shot.

Given that Van Persie had scored 13 league goals this season the only surprise was that the Dutchman had yet to join in the goalscoring fun, but the wait was soon over as he swept the ball home after good work from Walcott.

Wigan manager Roberto Martinez: "It was a frustrating day after we started well in the first 15 minutes. The two first-half goals were a little bit soft and really affected our performance and against a side like Arsenal it allowed them to control the tempo of the game.

"We have to stop conceding soft goals and as a team we need to defend better. One goal is difficult enough, but two goals, they were too big a weight on our shoulders and the game went easily into Arsenal's hands. We need to get stronger."

Arsenal manager Arsene Wenger: "It was a great team performance where we controlled the game and could have scored more. We can only be happy.

"There is a difference between the team at the start of the season and now and and we can still improve. Robin van Persie was exceptional, especially in a collective way."