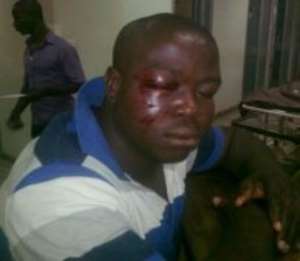 Ghana premier league side Medeama Sporting Club's director of operation John Cudjoe was attacked on his way to his hotel by a gang and he was stabbed on his neck and back.

He sustained several degrees of injuries and wounds on his body. The club's spokesperson Ebenezer Aidoo explains to JOY Sports “We will make an official complaint to the PLB and Ghana FA and when we see our lives are in danger, we will boycott the match,”

Medeama are contemplating boycotting Wednesday's league match at Berekum Arsenals in week 9 of the Glo premier league if their plea to the PLB and GFA are not responded to.

In other fixtures:the most attractive venue will be the Gyamfi Park, where New Edubiase host league leaders, Kumasi Asante Kotoko in a crucial battle which is key to Kotoko's title aspirations.

In Accra, Hearts will welcome Aduana in a battle the Phobians will not let go. All Stars after a losing to Hearts will get another opportunity to make amends as they face tottering Wassaman at the Sekondi Sports Stadium.

In the rest of the pairings , Mighty Jets face Liberty on Thursday at the Accra Sports Stadium, Lions play Tema Youth at Kpando, while Bechem host Ashgold at Bechem.