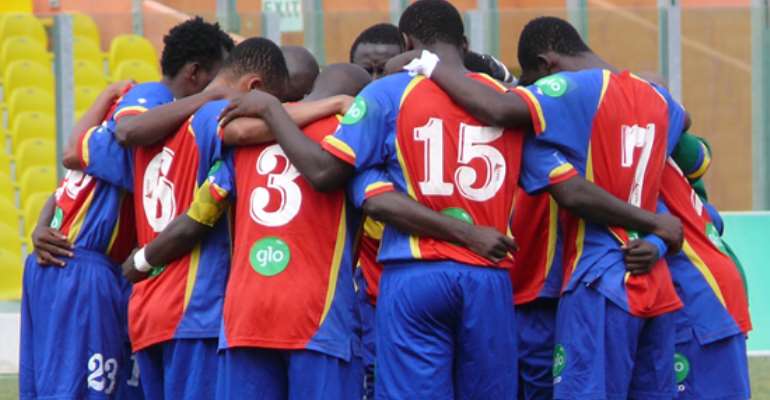 Accra, Nov. 29, GNA – The management of Accra Hearts of Oak Sporting Club has cleared the air on issues related to the incentive package for its players towards their triumph in the CAF Champions League in 2000.

The Phobians beat Tunisian side Esperance 5-2 on aggregate to become the first Ghanaian Club to win the CAF Champions League but the feat has been soiled with media reports of unfulfilled promises to the playing body and officials.

Statement issued and signed Emmanuel Martey Commodore-Mensah, Board Chairman of the Club copied to GNA Sports on Tuesday in Accra said the players received their due for their role in the historic achievement.

It explained that the Club pledged to share the prize money with the technical team and the players as part of a package to motivate and challenge them to give off their best.

“In addition to the usual 250 dollars per diem for trips outside Ghana, and the 600,000 cedis (now 60 Ghana Cedis) match winning bonus paid to each player, the Club also gave out 50 percent of bonuses paid by CAF for Goals scored/Points earned by the Club to the beneficiaries.

The statement added that the Club received only 375,000 dollars from the Confederation of African Football (CAF) out of the 500,000 dollars prize-money for winners of the premier Continental Club Championship at the time.

“Out of this money, an amount of 100,000 dollars was handed over to the Head of the Technical Team, Mr Cecil Jones Attuquayefio, who together with the captain, Jacob Nettey and Emmanuel Osei Kuffour disbursed the amount to the players without the involvement of the then Management Committee.”

It added that 600,000 dollars was promised the playing body for participation in the FIFA World Club Championship, but the tournament was cancelled by the world soccer governing body, Federation of International Football Associations (FIFA) due to sponsorship challenges at the time.

“Unfortunately, this Championship was cancelled by FIFA and we were unable to benefit from the expected prize money of 2,700,000 dollars. We were therefore unable to honour the pledge.

“It is worth noting from the above that, even though the Club incurred huge expenses from participation in the competition, it made sure that the players were well catered for and received a substantial amount of money for the services rendered,” the statement concluded.