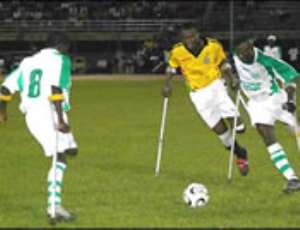 Accra, Nov. 23, GNA – The national amputee football team, The Black Challenge qualified for the semi-finals of the ongoing Cup of African Nations for Amputee Football with a 11-0 thrashing of Niger on Wednesday at the Accra Sports Stadium.

The result ensured the Black Challenge qualified to the last four of the third edition of the biennial championship alongside Group A winners, Sierra Leone.

The Nigeriens were not tough customers for the Ghanaians in the one sided match, which brought out the best of the hosts.

The homers got hat-tricks each from Collins Gyamfi and Richard Arthur Opentil, whilst Richard Ekwam grabbed a brace with Augustine Hinne, Hamza Mohammed and Joseph Kwasi Amoh also on target to give hope to the host.

The debutants were not expected to pose a serious threat after suffering a similar humiliation at the hands of Sierra Leone last Tuesday.

As early as the third minute the Ghanaians were up through Gyamfi before Opentil doubled the lead on 10 minutes.

Before half time, Gyamfi and Opentil completed their hat-tricks with two goals each in the one-sided match as the Nigeriens were stuck to their half in an effort to protect their goal area but to no avail.

In the second half, Hinne scored the seventh goal on 30 minutes before 'dribbling wizard' Ekwam made it 9-0 few minutes later.

Substitute Mohammed connected home a beautiful free-kick on 41 minutes before Ekwam and Amoh completed the routing in the dying embers of the game.

Ghana finished on three points, three adrift of leaders Sierra Leone with Niger having no point.

In Group B, holders Liberia were held to a 1-1 draw by Nigeria with both goals coming in the second half.

Ghana will face Angola at the semi final stage whilst Liberia lock horns with Sierra Leone both on Friday at the Accra Sports Stadium.