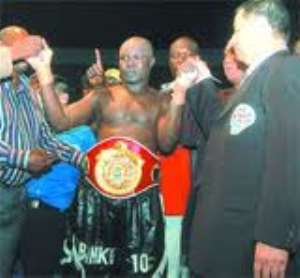 Accra, Nov. 15, GNA – Ghana's Light Heavyweight boxer, Braimah Kamoko has been adjudged the African Boxer of the Year by the World Boxing Organisation (WBO) for the year 2011.

Kamoko nicknamed “Bukom Banku” was named the finest African boxer by the global boxing body at its annual convention held from 24-29 October in Puerto Rico.

Information gathered by GNA Sports indicates that 31-year old Kamoko, holder of the WBO Africa Light Heavyweight title stood out amongst his competitors for the honour awarded to the most distinguished boxer during the year under review.

Famed for his antics in and outside the ring, Kamoko won his two fights during the year; managing a unanimous decision over Namibian Vikapita Merero in June and a fourth round knockout of Uruguayan Jorge Rodriguez Oliviera earlier in January.

It is the most recognised individual honour for the enterprising boxer since joining the professional ranks in 2000.

With a record of 22-0-0, the Bukom-based boxer has risen to number two on the WBO latest ratings as far as the Light Heavyweight division is concerned.

The number one contender is Russian Dmitry Sukhotsky, the Inter-continental champion with British Nathan Cleverly as the Champion.

The latest rankings takes Kamoko closest to realising his long-cherished dream of a world title within the shortest possible time as he is the only African in the top five bracket.