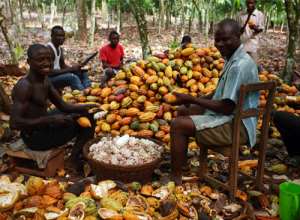 He made the call at Manteware when the PBC inaugurated a new farmers' society for cocoa producers who sell their produce to the Company.

Opanin Gyabaa noted that the incidence of bushfires, for which he blamed particularly miscreants, could be abated and even eliminated if farmers remained vigilant and reported such fires for immediate redress.

He acknowledged the rapidity with which young farmers in his area had engaged in cocoa cultivation and expressed the hope that their efforts would soon impact positively on Ghana's cocoa production to push the country to become the world's leading producer.

The Zonal PBC Officer, Mr. Appiah Kubi, urged members of the new society to form cooperatives to attract government assistance and from other agencies.

He assured the society of the company's desire to make farming activities less burdensome to its members by providing moral and material support.

The zonal officer expressed appreciation for the decision of the youth to engage in cocoa farming, saying they stood to derive maximum benefits from the venture.

Mr. Appiah-Kubi appealed to cocoa farmers to religiously observe all laid-down cultural practices associated with the production of quality cocoa beans for export.