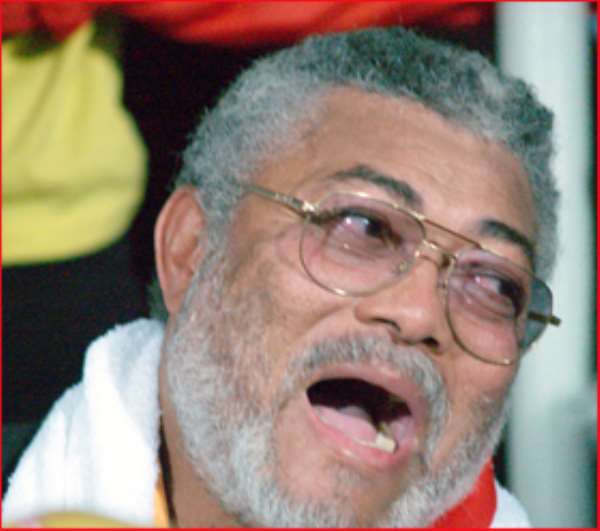 “Former President Rawlings has thrown his weight behind the actions of the NDC youth who torched the party's office and destroyed property in the wake of ruling on Yaa-Naa's murder last Tuesday. According to Mr Rawlings, the anger at the ruling NDC was long overdue, adding that the action of the aggrieved youth would have been worse, had they not restrained themselves. He therefore commended them for controlling their anger. 'I am here to praise them for the control that they exhibited; that they took it out on the party structures, the government's party structures, that is very much justified. I believe an opportunity is on the horizon for us to do justice,' he opined” (Ghanaweb, April 3, 2011).

The Andanis, Abudus
The Abudus, Andanis
Great Lions of Dagbon
Landlords of the savanna
The sentries of boldness
Wake up from your stupor
JJ has copiously thanked you
JJ has congratulated you
For embodying violence
For destroying property
For breaking normative laws
For being happily anarchic
And you are joy-riding
On his cartoonish evidence
On JJ's national follies
Like shea-butter in the sun
Melting into nothingness

JJ is championing violence
His magnetic divisiveness
His cacophonic narcissism
Our brothers, sisters
Our Northern siblings
Time to take the narrative
Narrative of peace-building
Take the narrative from JJ
Rawlings' narrative of fire
Rawlings is stoking the fire
Fire-ing the ashes of peace
Fire-ing you to violence

The Andanis, Abudus
The Abudus, Andani
Wake up from your stupor
Tell JJ to give his evidence
Evidence on his rampage
His murderous rampage
The killing of the judges
Of Yeyeboy
Of B. B. Bismarck
Of the Judges
Fires of violence
Fires of corruption
Fires of brutalization
Fires of “tribalism”

The Andanis, Abudus
The Abudus, Andani
Wake up from your stupor
You are one people
Same traditions, culture
For how long, how long
Must you be exploited
By JJ Rawlings
By the NDC, NPP
By your own elites

The author has 191 publications published on Modern Ghana.