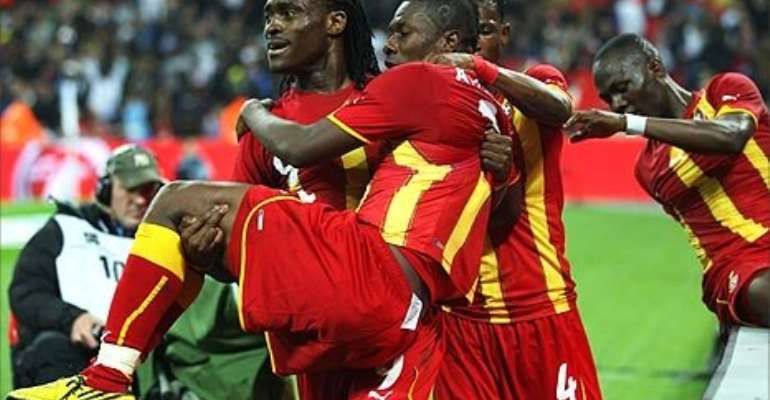 Derek Boateng picks up Gyan as Ghana celebrate their equaliser


A goal of breathtaking genius from Ghana's Asamoah Gyan earned the Black Stars a crucial equalizer against an impressive English side in an international friendly, Tuesday.

Andy Caroll put the English side ahead in the 43rd minute with a well taken left volley after dominating possession early in the game.

It was a tale of missed chances in the first half from both sides with Black Stars' Dominic Adiyiah beginning the plot. Played through by Gyan, Adiyiah fluffed a one-on-one situation in the 5th minute getting the legs of Joe Hart instead of the net.

The English looked even livelier with Wilshere and Barry in midfield and dictated the pace for most part of the first half and caught a resolute Ghana defence napping intermittently.

On one such occasion, Downing proved a slippery customer for Lee Addy on the left, got the better side of him in the final third but shot wide from an acute angle.

Moments later in the 14th minute Ashley Young forced a terrific finger-tip save from Richard Kingson with a curled shot destined for the net.

The Aston Villa lynchpin again missed a glorious opportunity when his sliding connection to a Downing cross on the right hit the cross bar with Kingson completely beaten.

At that stage it looked evident the English were well on track of maintaining an unbeaten record against African opposition in 16 appearances but looked more like embarrassing the highly rated Ghana team.

But the Stars woke up from the early slumber and took the game to the English. Hart pulled a great save to deny a goal bound shot from Adiyiah.

In the 29th minute Gyan was gifted a silly pass from Hart but the Sunderland striker from an extremely acute angle selflessly waited for his strike partner Adiyiah. His pass was well dealt with by the English Defence.

The English made their domination count when Andy Caroll in the 43rd minute blasted a low ball through the legs of an on-coming Mensah for the first and a crucially important goal for the English side.

Goran Stevanovic made three substitutions after recess bringing on Derek Boateng, Jonathan Mensah and Daniel Opare for Anthony Annan, Isaac Vorsah and Lee Addy respectively and his substitutions paid off.

Boateng stabilised the midfield with his robust tackles and surged forward with teasing runs to support the attack.

The English sat back and on few occasions tried to catch the Ghanaians on the break.

Even though the Stars lifted up their game in the second half the chances created were few and far-in-between.

With the 90th minute mark, Fabio Capello's side looked almost destined to wrap up an historic victory in front of an 80,000 capacity crowd at Wembley but Gyan -a player who frustrates and inspires with equal measure- had other ideas.

With a pass on the edge of the 18 yard box, the Sunderland goal poacher teasingly outwitted his marker, dummied through a forest of English legs before slotting past Joe Hart with his weaker left foot.

One all it ended in a game that was completely outstanding; especially without key starters- Frank Lampard, John Terry, Wayne Rooney for England and Prince Kevin Boateng, Michael Essien for Ghana.

Prof Naana Jane stings NPP on Corruption: 'Not even family i...
6 minutes ago