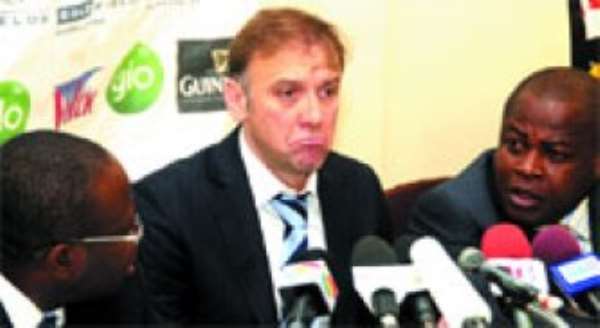 Young and ambitious, the 44-year-old Serbian stopped short of ‘anointing’ himself as Ghana’s ‘Special One’, Jose Mourinho-style. However, the Serbian coach, nicknamed Plavi, outlined his ambitions clearly, and even had the courage to promise to stock up the Stars’ trophy cabinet which has not seen any major addition since Ghana’s record fourth African Nations Cup triumph in Libya 29 years ago.

“I am here to make the Black Stars shine even better. “It’s been many years since Ghana won the African Cup. But it’s time for trophies. It’s time to be first again,” said Stevanovic who officially begins his two-year contract on February 1.

His predecessor and compatriot, Milovan Rajevac, was perhaps Ghana’s most successful coach in the last three decades, but was still taken to task for stifling beautiful football in preference to defensive tactics.

However, such rigid tactics as 4-4-2, 4-3-3 or the infamous the 4-3-2-1 preferred by Rajevac mean little to the new coach. Rather, Plavi wants to win not only trophies, but also to establish a winning system what will allow for “attractive and attacking football” while being cautious in defence.

Stevanovic, who claims to have followed the exploits of the Stars at both the 2010 Nations Cup and FIFA World Cup where Ghana finished as quarter-finalist, says motivating his players to raise the bar to higher heights will be one of his major challenges.

Qualifying for and winning next year’s Nations Cup in Gabon and Equatorial Guinea, or claiming Ghana’s fifth continental trophy at the 2013 Nations Cup, and qualification to the 2014 FIFA World Cup will be critical benchmarks in assessing the Serbian’s performance and his possible re-engagement by the Ghana Football Association on another two-year contract.

Like his Serbian predecessors Ratomir Dujkovic and Rajevac who took Ghana to the 2006 and 2010 FIFA World Cup Finals respectively, Stevanovic is determined to lead Ghana to Brazil 2014 and outshine his famous compatriots affectionately called Doya and Milo by Ghanaians.

He is well aware that “results speak for coaches” than just waxing lyrical about their ambitions and special qualities, and Ghanaians will evaluate his work by his achievements.

“If I don’t equal past records or do better than my predecessors, then you can consider it a failure,” says Stevanovic who will earn €30,000 a month.

He gets down to work next month by first attending the African Nations Championship (CHAN) in the Sudan to assess the best local players and later travel to England to talk to Michael Essien out of his self-imposed international hiatus ahead of Ghana’s Nations Cup qualifier away in Congo on March 27 and the much-anticipated showdown with England at Wembley two days later.

In keeping with a tradition by his predecessors who worked with expatriate assistants with different designations, Stevanovic will be working with a Serbian assistant who will provide technical support as an analyst at the coach’s own expense.

Dujkovic brought an assistant coach, Ali Kanyas, while Rajevac worked with a Serbian interpreter who was paid more than assistant coach, Kwasi Appiah. However, the GFA insists the tactician, who holds an UEFA coaching licence A and is an IT specialist, will help Stevanovic analyse games at no cost to Ghana.

Meanwhile, one-time GFA chairman, Ben Koufie, has sounded a warning to new Stevanovic to steer clear of player management if he hopes to remain successful and avoid unnecessary controversy.

As a former national coach, Mr Koufie is well placed to counsel the Serbian to avoid a potentially slippery ground which got his predecessors negative media attention for their alleged role in player management and bending the rules to favour players courted by Virtus International, a player management group run by Serbian agent Goran Milovanovic, who incidentally managed Rajevac.

“Stay away from player management,” advised Mr Koufie, who noted that it was important the new coach learned to accommodate the “volatile media” during his tenure.

“Be firm, work as a professional, and remember people are watching your every step,” said the ex-GFA man.

“The moment your appointment letter is written, your dismissal letter is also written at the same time, albeit slowly... one line after the other. It can be slow and could take months or years but all depends on how successful you are.”