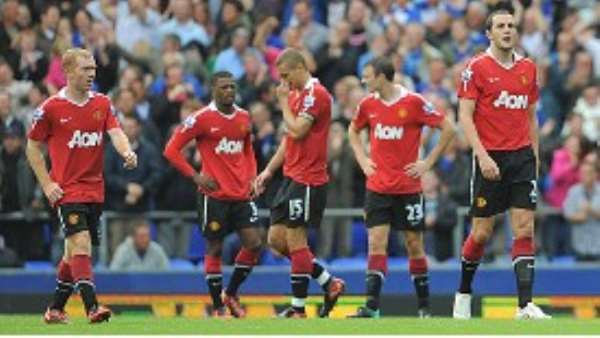 
Lee Bowyer struck a controversial 90th-minute goal to earn Birmingham a draw against Manchester United, who moved back to the top of the Premier League.

United had taken the lead when Dimitar Berbatov released Darron Gibson with a clever flick and then took the return pass to drive a shot inside the post.

An 18-yard Berbatov strike also hit the post before the late drama.

A Blues cross appeared to hit Nikola Zigic's arm and Bowyer slid the ball home despite appearing to be offside.

Birmingham lifted themselves out of the bottom three with the draw but United will feel aggrieved at the manner of the leveller.

In addition to what looked like clear handball and offside infringements, the goal might also have been ruled out for a foul by Zigic on Rio Ferdinand as he went up to meet a ball put in by Roger Johnson.

Nonetheless, United have again dropped points on their top-flight travels and have now managed only one win in eight games on the road this season.

United went into the match also looking to regain top spot from Manchester City, who leapfrogged them after beating Aston Villa earlier in the day.

The task was never going to be easy against a Birmingham side that had been beaten only once in their last 23 top-flight games at home.

And United were quickly frustrated by their opponents' 4-5-1 formation as the Blues produced the sort of discipline and organisation that has thwarted so many rivals.

With time and space at a premium, the touch and precision of United's play needed to be of a high order but the visitors fell into the problems of many before them as they struggled to pick a way through Birmingham's lock.

And, with United struggling for flair and fluency, it was fortune which came close to giving them the lead.

An attempted cross from Ryan Giggs looked to have flown over the head of Ben Foster but the keeper backtracked brilliantly and managed to get his fingertips to the ball to divert it against the post before his defence cleared the danger.

Other than that Foster, who was sold by United to Birmingham during the summer, was rarely called into action.

United forward Wayne Rooney was deployed on the left of midfield with the licence to go forward but his struggles continued and he looked unlikely to score his first goal from open play since March.

Although Birmingham looked secure at the back, their solidity came at the expense of a genuine threat at the other end.

When they did get a sight of goal Craig Gardner, who had latched on to a Bowyer lay-off, could only send a shot from the edge of the box high and wide.

After the break, a cleverly worked corner gave Gardner another sight of goal as the ball ricocheted to him but the Blues midfielder's snapshot from 12 yards went straight into the arms of keeper Edwin van der Sar.

United and, in particular Berbatov, heeded the warning and produced the type of creativity the game had been starved of to break the deadlock.

Berbatov exchanged passes with midfielder Gibson before unerringly driving a low shot into the bottom corner of Foster's net.

It took the United striker's tally to 14 in the league and, with the home side momentarily rocking, he was only denied another when his 18 yard strike hit the post.

Birmingham boss Alex McLeish brought on the lofty Zigic to give his side an aerial threat in attack and the move eventually paid off in dramatic fashion as he helped set up the late leveller for Bowyer.

A point still proved enough for United to return to the Premier League summit on goal difference from City - although Sir Alex Ferguson's men have two games in hand over their neighbours.