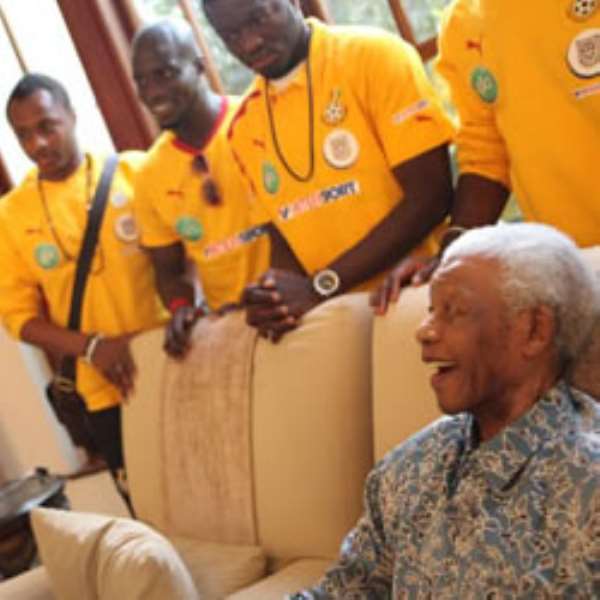 With 2010 drawing to an end, it's time to look back at some of the highlights and lowlights from a year that begun with something worthy - finalist at the Cup of Nations - and concluded with Ghana sweeping prizes at the African football awards and Asamoah Gyan's near-miss of the top-most Caf gong - the African Footballer of the Year.

2010 would certainly go down as eventful year for Ghana football, no wonder the President of the Ghana Football Association, Kwesi Nyantakyi gives the sport a high rating.

“We can always look at the highlights and be proud of the many good things we did that brought pride and honour to our nation and the entire continent. The Nations Cup was a good platform to begin with and the World Cup followed up, though it was in mid year, that [World Cup] was the high point of the many successes. The return of the FA Cup and introduction of the reserve league plus the Zonal Championship for the Women's game that the GFA solely sponsored all shows the positive strides we made.

"The completion of the FIFA Goal Projects and the benefits of the Win in Africa with Africa concept are great achievements. I think had Asamoah Gyan won the Africa best award, it would have crowned a very busy year of many successes. However, I still think Kwadwo Asamoah, the Black Stars and Milovan Rajevac, our former coach need to be commended for their awards at the Caf Awards for 2010," said the GFA President.

Despite the excitement provided on the pitch the year also drew some setbacks with the Black Starlets and women's national sides failing to match the successes chalked in other areas.

“On the down side the Starlets failed to qualify for the Africa tournament and the women did not do as well as we would have wanted so those are things we have to work on in the New Year.”

The year begun with the 2010 African Nations Cup in Angola and Ghana did not disappoint despite entering the competition with an injury hit squad in a tournament which drew mixed reactions following Togo's withdrawal after a gun attack on their team bus en-route to Cabinda.

Ghana after an opening 3-0 defeat to Ivory Coast went to beat Burkina Faso, hosts Angola and Nigeria - winning all games by a 1-0 scoreline - on their way to the finals where they succumb to Egypt.

Amid the pain of a final heartache, the emergence of a new generation of players - Samuel Inkoom, Andre Ayew, Emmanuel Agyemang Badu, Opoku Agyemang, Isaac Vorsah, Lee Addy - under the win of ex-Ghana coach Milovan Rajevac gave many something to look forward to.

The Black Stars picked themselves up for the much bigger task, playing at the first ever World Cup finals to be hosted by an African nation - South Africa.

Kevin-Prince Boateng made his Ghana debut ahead of the World Cup and gave the team many options. He was a new revelation and a welcome addition to the squad which had the experienced players still around to back the campaign in South Africa.

And they reached the quarter-final, missing the last kick from a penalty spot that could have landed them a last four place as Ghana eventually lost on penalties to Uruguay.

Notwithstanding, Ghana, the only African side to have progressed past the group stages left an impression that will not fade from the memory likewise the hosting of the team by Nelson Mandela at his home in Johannesburg.