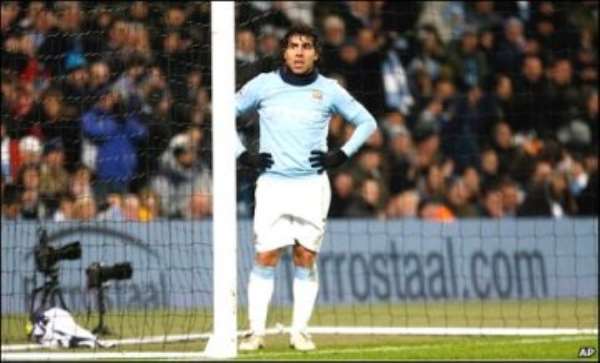 
City, who went joint top of the league on Saturday, said they were disappointed by the move, particularly as they had been so accommodating of the Argentina striker's personal circumstances of his family living in South America.

"This is both an unfortunate and unwelcome distraction and the club will remain focused on the games ahead in what is turning out to be a very promising season," the club said in a statement on its website.

"The door remains open for Carlos to be selected to play."

Tevez, who joined City in 2009 after a spell at Manchester United and is the club's highest-paid player, missed Saturday's 3-1 victory at former club West Ham United through suspension.

He has been enjoying some of the best form of his career at City, scoring 33 goals in 50 league appearances, and his desire to leave comes as more of a disappointment than a shock to fans given reports he is feeling homesick.

The 26-year-old has often spoken of his desire to return to South America and in August he hinted that he could even consider retiring from the game, such was his dismay at Argentina's defeat by Germany in the World Cup quarter-finals.

"Roberto Mancini and all at the club have shown, and will continue to show, sensitivity to Carlos' personal circumstances including the issue of his family being based overseas," the club statement said.

"Indeed following his suspension as a result of the game against Bolton, Carlos requested, and was given, special dispensation by the manager to take leave overseas.

"The written transfer request is in stark contrast to Carlos' stated position in both public and club contexts."

The club said it had received numerous requests over recent months from Tevez's representatives to renegotiate and improve his playing contract as well as more recently a request to extend the contract by another year.

"However, in line with the club's policy of not negotiating playing contracts mid-season this has not been granted," the statement said.

"Carlos's current five-year contract has three-and-a-half years to run and he is the highest-paid player at the Manchester City football club."

Tevez, who cost City around £26 million would attract interest from across Europe's biggest clubs in the approaching transfer window and City would have little trouble recouping their outlay.

The striker made his name with Brazilian club Corinthians before joining West Ham United along with Javier Mascherano - a controversial deal that later cost West Ham a £5.5 million fine because he was part-owned by businessman Kia Joorabchian's MSI company.