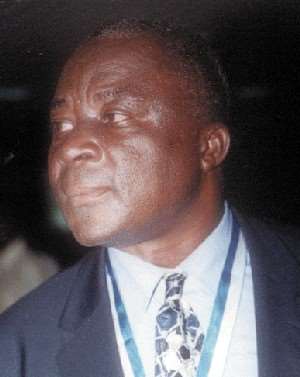 With the minister of Youth and Sports, Edward Osei Kwaku, and GFA chairman Ben Koufie, opposed to each other over the "foreign coach or local coach debate", coach Afranie has hit the receiving end of what appears to be lack of support from the F.A.

Minister Osei Kwaku last month made clear his preference for a local coach, citing the heavy financial implications. But the same venue where the minister made the declaration, chairman Ben Koufie announced the F.A.'s counter position a week later.

In the midst of that conflict stands coach Afraine, now feeling the heat, which has long been associated with the hot seat of the senior national soccer team, the Black Stars. Barely three months after his appointment as the caretaker trainer for the Stars, Afranie is already entangled with the usual frustration which has been the bane of almost all coaches of the stars as far as team-building and preparations for international matches are concerned. And he believes the F.A. is not supportive

Having plunged into a false sense of security after his first assignment against Rwanda in Accra last October, in which he almost had the full compliment of players he invited for the match to secure a 4-2 victory, coach Afranie needed an international friendly against the Super Eagles last Sunday to come to terms with the reality.

After hoping to have the full compliment of the home-based players for that match following the end of the premiership, the ‘Coachhene’ as he is affectionately called, was a disappointing lot on the match day after being compelled to struggle to assemble 18 players for the match after some key Hearts players, including Charles Taylor and Bernard Dong-Bortey, failed to join the team for various reasons leading to the Stars, 0-1 loss to the Super Eagles in Accra.

As if that was not enough, coach Afranie found himself deep inside similar crisis when the Stars left for Egypt on Thursday to play the Pharaohs in another friendly at the Cairo national stadium on Sunday. Bursting out his frustration to the Graphic Sports before the team's departure yesterday, coach Afranie revealed that the team had further been weakened following the injury of Razak Pimpong and Isaac Boakye in last Sunday’s match.

Coach Afranie was also bitter about the lack of cooperation from the Ghana Football Association (GFA) in respect of his intention to invite Tunisia-based Godwin Attram who is willing to join the Stars for Sunday's match. Afranie indicated, however, that he was going to pursue the issue in Egypt to ensure that Attram joins the team.

What perhaps represented the coach's greatest disappointment was the inability of Borussia Moenchengldbach midfielder, Lawrence Aidoo, to make the trip after the player had earlier given him a firm assurance. According to the coach, Aidoo who arrived in the country for holidays last Tuesday eventually notified him of his inability to make the trip due to fatigue.

In his disappointment, coach Afranie hurriedly arranged for the inclusion of Amui Quaye and William Tierro of Olympics and Liberty Professionals respectively in the team.

The Stars trainer was, however, optimistic of a good outing against the Pharaohs as he disclosed that the expected inclusion of Bernard Dong-Bortey from the United Arab Emirates will boost their chances. All things beings equal, the Stars will play another friendly against Togo in Lome on 28 December.