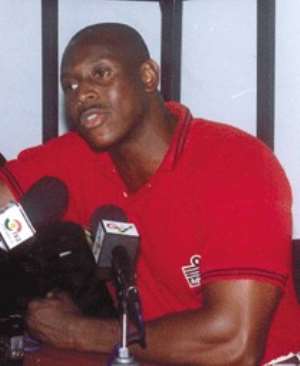 The flamboyant Chief Executive of Kumasi Asante Kotoko, Herbert Mensah who has run the club since 1998 is asking for an indemnity when he leaves office. Before last Sunday’s match between Kotoko and WAC, Mensah had intimated to the Board during a meeting on December 3, 2002 that should there be a decision to relieve him of his post, he wants the club to sign a memorandum of non-disclosure.

It means that the CEO wants to gag the board and the entire following of the club from questioning anything done or any discrepancy that would emerge from the accounts he would later render.

The CEO is on record as saying that the club is indebted to him in billions of cedis which is being hotly contested by knowledgeable persons and the Board who hold the opinion that it is rather Mensah who has benefited immensely from the management of the team.

According to popular opinion there are all sorts of deals in respect of gate proceeds and other financial related strategies which are likely to be exposed when he leaves office, hence his request for a rather amazing memo of non-disclosure, a kind of indemnity which is so uncomfortably similar to the transitional provisions of the 1992 constitution.