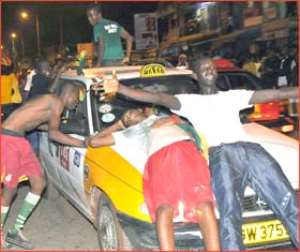 The national soccer team, the Black Stars, have once again given Ghanaian fans, and indeed African soccer lovers, every cause to celebrate after last Saturday's crushing of the United States of America (USA) in the on-going 2010 World Cup in South Africa.

And if the rate of celebration in the nation's capital when the team qualified for the second round of the tournament was said to be fantastic, then what was witnessed in Accra on Saturday night was simply beyond description.

While the first celebration reportedly claimed a life in northern Ghana, unconfirmed reports reaching DAILY GUIDE say four people died this time around, as some celebrants got carried away in the jubilation fever.

The four, all residents of Accra New Town, were crushed to death when the car they were riding in was involved in a ghastly accident.

No sooner had the Hungarian referee signaled for the end of the 120-minute cracker than fans back home began to pour out on the streets in one form of jubilation or the other.

From Nima through Maamobi and New Town to Kanda, the streets were virtually choked with jubilant vuvuzela-wielding fans.

While some sat on vehicles and merely waved the national flag, others drummed and danced around town deep into the night, with a frenzy hardly seen anywhere in any part of the city.

The picture was not different at Teshie-Nungua, where dozens of jubilating 'Jama' groups took over the main road to the extent that at a point, vehicular flow between Accra and Tema grinded to a complete halt.

As group after group thronged the main road amidst newly-composed songs in honour of some of the players, so were the cacophonies from the vuvuzelas that marked the Stars' victory at other suburbs, including Nungua Addo Gon, Spintex Road and Mimpaasem in East Legon.

At Dansoman, reports say semi-naked men, some only in underpants, with vuvuzelas in hand, were seen parading the main road between Roundabout and Last Stop, while night clubs like Faculty Pub (Dansoman), Bus Stop (Ring Road Central), Cellsbridge (Labone) and Rhapsody (Shopping Mall) were full to capacity.

He said even though the club was a relatively new spot in the area, he was amazed at the turnout of teeming customers after the match.

Mr. Ofosu-Armah said he would pray that Ghana wins her other matches ahead so his business will boom.

Despite all the dismay and despair at the performances of African teams at the tournament, the Black Stars continue to keep the hope of the continent alive.

Ghana booked a historic quarter-final berth in a duel that took 120 minutes of grueling exchanges and a goal of breathtaking genius by Asamoah Gyan.

In what looked like a repeat of their 2006 clash in Germany, the Stars snatched a late winner with Gyan's 98th minute left footer to edge out the US team, after a one all full time battle.

Kevin Prince Boateng broke the Ghanaian jinx of inability to score goals, except through penalties, when his 5th minute 37-yard shot took the Yankees unawares. But the US pulled back in the second half through Landon Donovan's fantastic penalty kick.

And eight minutes into extra time, Gyan trapped the ball on his chest after a volley from Dede Ayew and shoved aside two US defenders before unleashing a measured left footer, beating goalie Tim Howard for Ghana's second and winning goal.