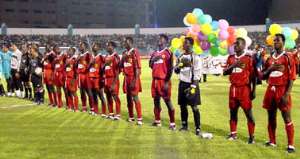 Ghana's Asante Kotoko, one of the most successful clubs in three decades of African club competition, seeks to write a new chapter in its illustrious history Saturday when it plays Wydad Casablanca in the first leg of the African Cup Winners' Cup final.

Kotoko have played in five African Champions Cup finals but make their debut in the Cup Winners' Cup decider promising to continue with their attacking style despite having the advantage of a home game to come in the return leg next month.

Kotoko have been rampant in front of goal in this year's competition but notoriously leaky in defense in their away matches, where they have conceded 11 goals in four away games on the road to the final.

It is a style that could play into the hands of their hosts, who will be hoping to take a defendable lead to the return leg of the final in Kumasi on December 8.

Wydad go into Saturday's match at the Mohamed V stadium two weeks after winning Morocco's Throne Cup and with two more victories in the domestic league under their belt.

The match also presents an opportunity for their Argentine coach Luis-Oscar Fullone to further inscribe his name in the African football history books.

Fullone won back-to-back African Champions Cup titles in 1998 and 1999 with two different clubs -- ASEC Abidjan of the Ivory Coast and then Raja Casablanca of Morocco.

Having only been at Wydad since September, he can now add the third continental title in four years to his resume if the Moroccan side overcome Kotoko.

Like their Ghanaian opponents, Wydad have also previously won the African Champions Cup but no Moroccan side has yet lifted the Cup Winners' Cup.

Kotoko, seeking to adapt to colder conditions in north Africa, arrived in Morocco at the start of the week.

The side is coached by German Ralf Zumdick, brought in last month to taken over from the former Chelsea manager Ian Porterfield, who was fired after a disagreement with Kotoko's chairman Herbert Mensah.

Kotoko striker Michael Osei leads the goal scoring table in the competition with six goals, tied with the Brazilian Emerson, who has since left Wydad Casablanca to play in the Middle East.