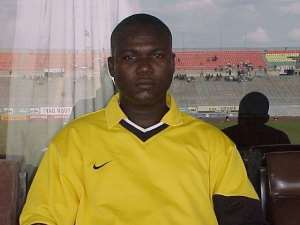 B/A SUPPORTERS HAVE NOT CONDEMNED NTOW FIAKOR, B/A MANAGEMENT CHALLENGES TIMES REPORTER. The Management of B/A United has debunked a story in the Wednesday November 29th edition of the Ghanaian Times, which sought to create an erroneous impression that supporters of the club have condemned Mr. Kwame Ntow Fiakor, the hard working Accra Representative of B/A United, for rightfully questioning the intentions of George Arthur over an alleged presentation of “an ultra-modern” office to the club, and consequently asks the reporter, Kingsley Hope to apologize to Management and followers of the club or face the consequence. A statement signed by an Executive Member of the club, Mr. Ransford Antwi (pictured), states, “After a painstaking investigations to ascertain the credibility of the rather disingenuous story, as well as an earlier publication, which sought to create unnecessary tension within the B/A United fraternity, we are highly convinced that the story was a cooked one, with many factual inaccuracies, and we urge Mr. Hope to retract and apologize”. The so-called Emmanuel Sarpong, who allegedly spoke to Mr. Hope, is not known to the club. The statement further urges all pressmen in the Brong Ahafo Region to be circumspect with their reportage on the club and always feel free to contact Management for a balanced version at all times. We need not be reminded of the 2000 soccer season when the same scenario led to our relegation. “It’ll be unthinkable for Management to think that all followers of the club would share our vision but we believe and are convinced that the genuine ones and all soccer loving fans in Ghana can see B/A United of today and contrast it with B/A in the days when the so-called big men led the club”, the statement stressed. According to Mr. Ransford Antwi, supporters of the club have never questioned the competence and loyalty of Mr. Ntow Fiakor and urge him to treat that story with the contempt it deserves. The statement entreats the Accra representative who also happens to be a member of the GFA Executive Council, to continue to selflessly serve B/A United as he’s been doing for the past twenty years. Indeed your statement, which was given excellent publicity, reflected the views of majority of the club’s following and a timely intervention and reminder, as the same George Arthur succeeded in creating a divided front in the club in year 2000 only to publicly resign from the club after B/A United had been relegated to the first Division that season, the statement said. Mr. Antwi assured the rank and file of the club to remain calm in the face of recent negative publications in the media, by people whose intentions are known to all, and promised that an extensive response would come after the end of the season, but for now, we can only focus on the task at hand, that is, place respectably in the on-going premier league”.