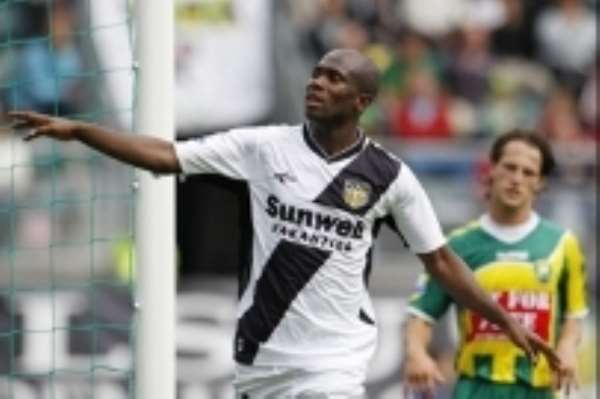 Ghana striker Matthew Amoah has returned to training with his Dutch club NAC Breda after serving a two-match suspension.

The forward was banned from playing two matches in the Dutch top flight after being found guilty of violent conduct last month.

Having served the punishment the Ghana international is ready to play in competitive matches for the club from this week.

The Dutch football prosecutor proposed a three-match ban for the NAC Breda striker last month after an incident during their 3-0 over ADO Den Haag.

But the Dutch Football Federation (KNVB) accepted Amoah's plea that his elbowing of Den Haag's Wesley Verhoek was provoked by the defender.

Amoah, who scored during the game, elbowed Verhoek after the defender attmepted a dangerous tackle on the Ghanaian forward.

The incident escaped referee Bjorn Kuipers but the Ghanaian striker was charged with evidence from television pictures.

Amoah missed crucial clashes with Feyenoord and Roda JC but he is now ready to serve his club again.

His absence was a blow for NAC Breda as he is among the club's top scorers.