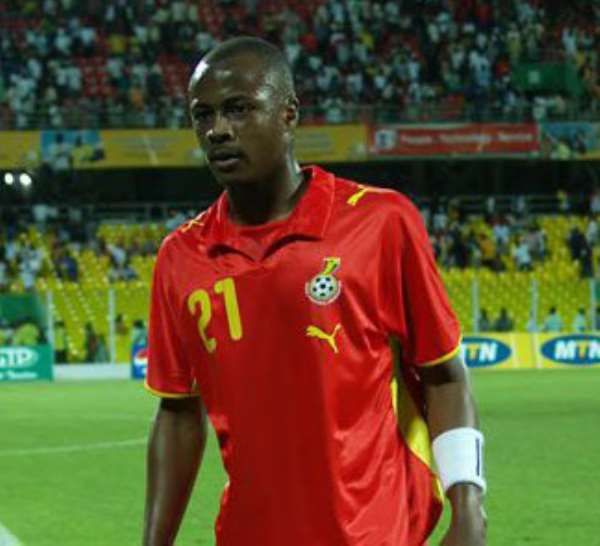 
Dede Ayew grabbed a brace in the French second-tier League and Harrison Afful provided the assist in Esperance's 0-1 win at Zarzis.

In England:
Portsmouth defied their poor showing this season in the Barclays Premier and defeated a well composed Harry Redknapp's Tottenham Hotspur by two goals to nil.

Elsewhere in the League one, Jo Osei Kuffuor took his goal count to 14 this season after scoring the consolation for Bristol Rovers in their 2-1 defeat at away.

In Scotland:
Dundee United further confirmed their brilliant performance in the Scottish League this season by brushing aside Raith Rovers to reach the finals of the Scottish Cup next month with Ross County.

Box-to-box midfielder Prince Abankwah Buaben was in fine form for the Terrors as they terrorised the lower division side 2-0.

Laryea Kingston returned to full time action for the Hearts who improved their status in the league with a 1-0 win over Kilmarnock.

In Italy:
Stephen Appiah's much anticipated Serie A debut for Bologna did not come to fruition as he failed to make it to the final 18 man squad for the home side.

Bologna narrowly lost the game by 2-3 to Lazio.
Udinese have revived their campaign to survive relegation as they won their second game in a roll.

The Little Zebras added bottom club Livorno to their victims after last weekend crucifying of Juventus.

Udinese played away from Stadio Fruili but yet managed to thump Livorno futher down the Serie log.

Inter Milan have finally surrendered their leadership to AS Roma as they failed to produce the needed points to consolidate their lead.

The Nerazurris drew two-all with Fiorentina at the Artemio Franchi.

Sulley Ali Muntari was introduced by Jose Mourihno on the 71st minute as a replacement for Goran Pandev.

In the Serie B, Ahmed Ampimah Barusso played 81 minutes for Torino who failed to grab a point at the Via del Mare against Lecce.

Germany:
Two second half goals from Brazilian Grafite and Edin Dzeko helped Wolfsburg to a 2-0 win over Nurnberg at the EasyCredit Stadion.

Isaac Boakye was not selected by Nurnberg.
TSG Hoffenheim's poor show continued as they have picked on two points from their last five games.

They lost over the weekend at home to FC Cologne.
Prince Tagoe replaced Luis Gustavo Dias whose profligacy cost the home side the win.

Hans Adu-Sarpei proved vital for Bayer Leverkusen as his introduction on the 52nd minute helped their attacking siege to draw on level terms against Bayern Munich.

In the Bundesliga II, experience midfielder Godfred Aduobe was out of action Karlsruhe who edged past Hansa Rostock at home.

Derek Owusu-Boateng has become one of the most consistent players for Getafe this season.

The former Beitar Jerusalem man was crucial in their 0-1 win for the visitors.

Mubarak Wakaso played 77 minutes for Elche FC as they demolished Real Unión Irun 3-0 at away.

The former U-20 midfielder assisted the second goal for his side.

France:
Asamoah Gyan played only 37 minutes in the Breton derby at the Stade du Moustoir as both teams failed to score more than two goals.

The Rennes leading scorer had to be taken off the pitch after taking a knock at the closing stages of the first half.

Holland:
There was a shock win for relegation battlers ADO Den Haag at the Nieuw Galgewaard.

Den Haag who were without a win in five games fought gallantly to beat FC Utrecht at their own backyard.

Nana Kwasi Asare was booked on the 42 minute for Utrecht while enterprising young striker Erixon Danso came on in the 57th minute.

Francis Dickoh was out of the first team squad.
Mathew Amoah was not in action for NAC Breda who narrowly scrapped a 1-0 win over Roda JC who had Eric Addo sitting on their bench.

Kwame Quansah skippered his side to that crucial away point to keep their European dreams alive.

NEC Nijmegen were tightly held at home by AZ Alkmaar whose title chase seem to be over.

Ajax loanee Jeffery Sarpong was the toast of the fans with his exhilarating skills in midfield to help them salvage a point.

Other:
Harrison Afful played the entire duration and set-up Esperance's 0-1 win at Zarzis in the Tunisian League.

Adam Larsen Kwarasey was in the goal post for Strømsgodset as they wrapped up a 4-2 home win over Sandefjord.

Former Hearts of Lions player Komla Ameywou was on the bench for the victors.

Anthony Annan continued to impress for Rosenborg as he helped them to a 2-1 win over Odd Grenland.

The midfield dynamo was the architect of the visitors' second goal.

David Addy was not out of the Porto first team squad as they won 1-0 over Rio Ave.

Haminu Dramani was missing from the team sheet of Lokomotiv Moscow which lost 1-0 to Zenit St. Petersburg.